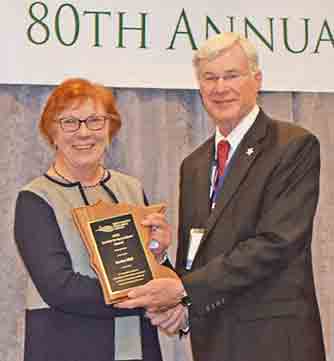 ST. PAUL – Minnesota Farmers Union (MFU) honored four of its members for their service to agriculture and Farmers Union during their annual banquet, November 20.

Hitterdal, Minn., farmer Larry Jacobson received the Lifetime Achievement Award for his service as a Clay County officer and as a delegate to the state and national convention along with his commitment to serving on the MFU Executive Committee. The award also recognizes the many hours he has spent representing Minnesota Farmers Union at events in northwestern Minnesota.

Jacobson has been a Farmers Union member for 72 years and he is a torchbearer, which is the highest award given to youth involved in Minnesota Farmers Union. He and his wife Regina raise wheat and soybeans.

“I feel Farmers Union is in a much better place today than when I was first elected county president. There were some really trying times in the 1980s and 1990s. The future of Minnesota Farmers Union looks bright,” Jacobson said.

“I worked very hard on the Carbon Credit Program for Minnesota Farmers Union in the mid-2000s,” he continued. “Area farmers could receive carbon credits for their farming practices that stored carbon in the soil. We also held golfing events in Fertile, Mahnomen and Erskine to raise money for updates at Lake Sarah Farmers Union Park and Campground.”

Ken and his wife Cheryl live in Ada, Minn.

Eunice Biel, of Harmony, Minn., received the Service to Agriculture Award. Biel is Fillmore County Farmers Union president and vice president of the Rural Investment to Protect our Environment board of directors. She is a Fillmore County Soil and Water Conservation District supervisor and a board member of the Minnesota Board of Water and Soil Resources and Center for Rural Policy Development. The award recognizes Biel’s leadership at the local, state and national levels both within Farmers Union and in the greater agricultural community.

“It is an honor to be recognized by Minnesota Farmers Union,” Biel said. “My first thought was ‘I haven’t done anything so special to deserve this.’

Biel and her family operate a 220-cow dairy near Harmony. Three generations of her family work on the farm.

Hannah Bernhardt received the Rising Star Award. Bernhardt operates Medicine Creek Farm near Finlayson with her husband and son. They raise grass-fed beef and lamb, and pastured pork for direct market through their website. They also raise livestock guardian dogs and have a Farm Stay agritourism rental.

“We have many amazing family farmer members who work hard every day to not only provide the nation’s food, fiber and fuel, but also provide leadership in Minnesota Farmers Union,” said MFU President Gary Wertish. “In a grassroots organization, we value active members who serve as leaders for other members. It is my pleasure to recognize Larry, Ken, Eunie and Hannah for their efforts on behalf of the Farmers Union family.”