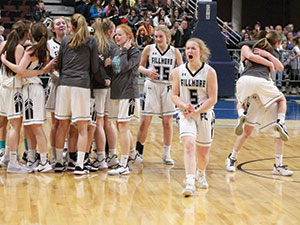 Blooming Prairie (21-5) came into the 2019-2020 Section 1A title game ranked #9 and the top seed.  They put it on Hayfield in the 1A semis 62-33.  Fillmore Central (21-8) came in unranked and seeded second.  They nipped GM 43-41 in the semis.  The Blossoms and Falcons were the last two teams left standing in a very open 1A field (given Goodhue’s departure to Class AA).  The Falcons were, by ranking, the underdog.  Yet, as the game’s first ten minutes unfolded, it became very evident it wasn’t the high seed that was the more athletic team.  Maybe in a “generic” half-court game, BP would’ve held an edge with their size.  But in a full-court game, which FC’s relentless 1-3-1 trap forces, it was edge Falcons.  FC out-worked BP, resisting every push, and played a full game.  That diligence earned them at least another couple games, just a little bit north, and in the Twin Cities area.

FC took command early.  Levi Olstad’s group forced turnovers on six of BP’s first nine possessions, leading to a 10-2 start.  Falcon senior forward Kandace Sikkink finally had a big game, after being the focus of teams’ defenses in the quarters and semis.  The 5’8” powerhouse put up 16 first-half points.  Fellow senior Emma Breitsprecher scored 11 points and grabbed 6 rebounds.  Hope Sexton hit a couple key threes.  The result was a strong half, a 36-24 intermission edge.  But the Falcons led GM big in the semis and escaped with a narrow victory.  Shots can fail to drop.  Everything can change in pressure-packed games.  When FC had four turnovers to start the second, and BP scored seven unanswered making it 36-31, it could’ve been a turning point.  But every time the Blossoms made a run, FC answered.  The Falcons scored seven straight to go ahead 43-31.  BP then scored six straight, making another push, cutting the lead to 43-37.  A Sikkink three-point play then capped an 8-2 Falcon run.  FC led 51-39 midway through the half.  BP then went on a 9-2 run to trim the Falcon edge to 53-48.  But Sexton hit her third three, a key shot with around 7:00 to go, putting FC up 56-48.  BP pushed a third time.  Five unanswered points, the last a three by Julia Worke, got the Blossoms as close as they’d been since 4-2.  With 4:45 left, the Falcons clung to a 56-53 lead.  But that three would be BP’s last field goal.  Kassidy Broadwater hit two big free throws.  A Breitsprecher steal and lay-up with about 3:30 to play made it 60-53 Falcons.  Megan Oswald hit two free throws for BP with 3:11 left, trimming the lead to 60-55.  The Blossoms scored just one more point.  The Falcons’ constant harassing 1-3-1 defense, topped and spearheaded by the 5’10” Breitsprecher, but also including long-armed 5’8” 8th grader Kammry Broadwater, and athletic 5’7” junior Maddie Krage, wore the Blossoms out.  Lead guard Bobbie Bruns will probably have nightmares with demons wearing white jerseys embroidered “Fillmore Central.”  BP finished the game missing their last seven shots while going 5 of 10 at the free throw line.  A broken play lay-up for Sikkink made it 62-55.  Four Falcon free throws followed.  With under a minute to go, the teal and black were again up double digits, 66-56.  BP didn’t even bother to foul in the final 0:50 or so.  It was futile to even chase the faster Falcons around.  It was over.  FC’s defense, and a good offensive game, had made it academic.  They say seniors make a difference.  FC’s trio proved themselves the best in the section.  Breitsprecher (the multi-time state track athlete), Broadwater (state track athlete, farm girl), and Sikkink (farm girl) were the catalysts that made it happen.  Everyone else played their roll.  All that was needed was exclamation point.  Sexton supplied that.  Her fourth three of the game in the few seconds was a crescendo.  Fillmore Central has existed for 26 years prior to this season, with no state berths in girls basketball, in basketball period.  That draught is over.  The 2019-2020 group beat BP 69-56 for the Section 1A title.  Levi Olstad’s bunch are state-bound! 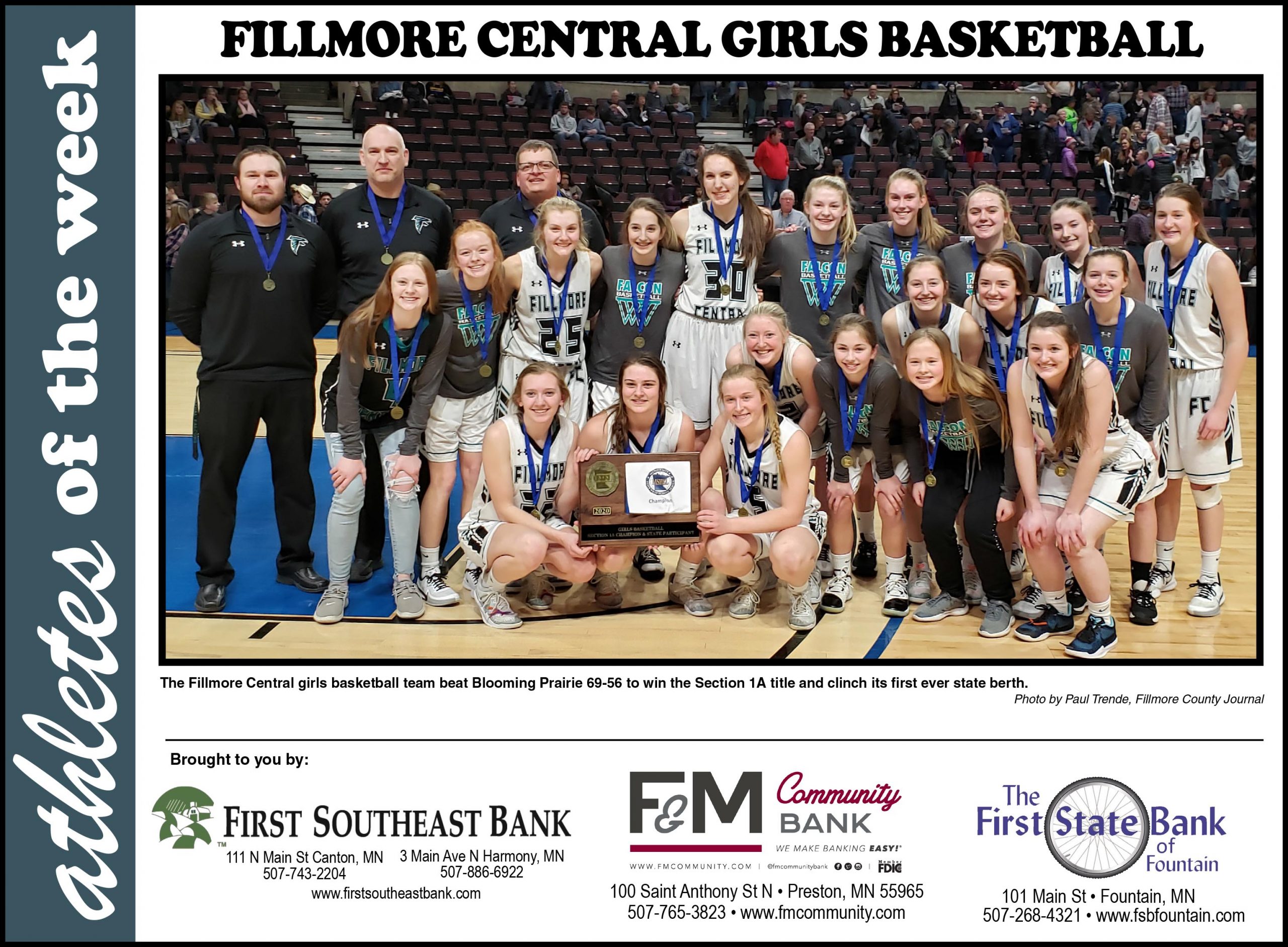