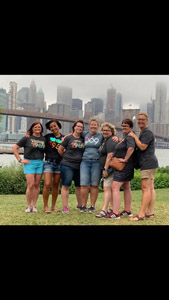 New York, the city that never sleeps. Bright lights, bustling sidewalks, and… seven life-long best friends, who are all originally from Chatfield on the “Today Show”?

As many know, bucket lists can bring you to so many new places, and for Kelly Nosbisch, Janet Nelson, Renee Bennett, Angela Clemens, Julie Griffin, Michelle Pederson, and Kelly Tweite, their bucket list brought them all the way to the Big Apple for their 50th birthdays.

After being in the planning stages for nine years, the small town girls made it to the big city. “It was a huge melting pot, there were so many languages spoken. It was really amazing,” Kelly Tweite continued, “I wish everyone had name tags saying where they were from or what language they spoke.”

This hasn’t been the only trip the group has taken. For their 40th birthdays, they planned a big trip to Las Vegas but plans changed for Michelle Pederson before the time came for the trip.

Pederson went to the doctor for her first mammogram because she had just turned 40, which happened shortly before the Las Vegas trip. There were no concerns, she was just there for the check-up. She completed the mammogram and the results came back positive. Kelly Nosbisch told me about her initial reaction to finding out Pederson had cancer, the rest of the group that was present resonated with what she said, “I remember her coming over to my house and telling me. It was devastating to know that someone you love has a long journey ahead of them.”

And Pederson did have quite a long journey. She went through eight rounds of chemotherapy with multiple surgeries along the way and now has been cancer-free for almost 10 years! When asked what got her through her fight, Pederson said, “Faith. Family. Friends.”

Ironically, the 50th birthday trip also lined up with Pederson’s 10 years of no longer having cancer.

During the girls’ trip, they did many different things, such as visiting Central Park, the 9/11 Memorial, Statue of Liberty, and Times Square! They even saw the Broadway musical “The Lion King,” which they said was phenomenal. There was also one highlight of the trip that was talked about not only within the group but all around the area back at home.

The group went to the Rockefeller Center to try and get on camera for the “Today Show.” Their goal was just to be noticed in the crowd somehow. They were in one long line, not expecting to make it but to the group’s surprise, Pederson was randomly chosen for “Ambush Makeover.”

“Ambush Makeover” is a segment of the “Today Show” where two people out of the large crowd are chosen to get a total makeover. They get a new outfit with hair and makeup done. Pederson talked about the behind the scenes work and how she loved every moment of it.

While Pederson was being pampered up, the rest of the group had to anxiously wait outside. It suddenly started to downpour and everyone scattered into nearby stores. Since they couldn’t go inside to the Today Show’s area, they went to a nearby Starbucks and sat inside for the remainder of the time till about two and a half hours later, when Pederson’s makeover was done.

She had no idea what she looked like; all the mirrors were covered in the area she was getting the makeover. All she knew was what her outfit looked like.

She walked out into the newsroom and her friends lit up with excitement and awe. Pederson had no idea what she looked like until they pulled a mirror out and she had the same reaction as her friends.

In the end, Pederson got to keep what she was dressed up in (other than the shoes, which she misses dearly) and left more excited than ever!

In total, the group walked about 40 miles during this four-day trip. By the time they got home there were lots of hurting and blistered feet, but they said it was definitely worth it. They all agreed that even though they loved going to New York City, the next trip will be at a nice relaxing beach.