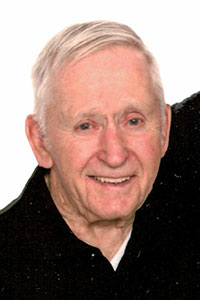 Everett Silas Sollien, 89, of Decorah, Iowa, passed peacefully in his home surrounded by family on the night of April 3, 2021.  Everett was born in Spring Grove, Minn., to Syver and Florence (Rauk) Sollien on September 16, 1931.  He graduated from Decorah High School in 1949.

Everett grew up farming with his family.  Outside of his enlistment in the U.S. Army from 1954 to 1956, he spent the rest of his life committed to his vocation.  He married Lois Lommen on January 20, 1957.  The couple farmed in rural Spring Grove from 1957 until 1959. On a very cold, snowy March 1959,  morning, they moved to the farm where they would  raise their family and  live out their lives.

Everett loved his Holstein cattle, and was very active in the Iowa Holstein Association.  He  served many roles in church and community organizations. Everett was a lifelong member of the Highland Lutheran Church.  He was a quiet, humble man of great compassion and integrity.  He would frequently refer to Lois as, “The best thing that ever happened to me.”  He loved Lois, and the family they created.  One of his favorite roles was that of Grandpa.

A private family funeral service for Everett will be held on Friday, April 9 at the Highland Lutheran Church, rural Decorah, Iowa.

In lieu of flowers, the family requests memorials to be sent to the Winneshiek County Hospice or the Highland Lutheran Church Cemetery Fund.

Mengis Funeral Home in Mabel is assisting the family.