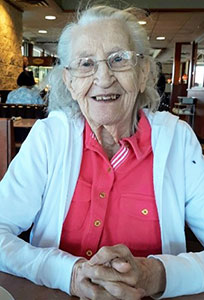 Eunice Lucille Trent, age 87, formerly of southern Minnesota, passed peacefully away in her sleep on Monday, July 27, 2020, in San Antonio, Tex.  She was a great woman of faith and received her final wish to be with her heavenly father.

Eunice was born in Spring Valley, Minn., to Charles and Amy Hare, where she was one of 14 children they had.  She married Eugene Trent and they moved to Waterloo, Iowa, where they shared many years together and later divorced.  They were blessed with five children: Janice, Larry, Steven, Charles, and Judy.  Eunice spent the last four years of her life in San Antonio, Tex., where she lived with her oldest son.

Eunice was a loving mother, grandmother, and great-grandmother to her 15 grandchildren and 24 great-grandchildren. She loved them all. It always seemed like she had a grandbaby by her side.  She always commented, “I don’t know why they like me so much.” Or, “How do they remember me?”  For those that knew Eunice, the answer to those questions is easy: it’s the love that she had, and her spirit drew people to her.  It would be nearly impossible to find a single person who didn’t like her after meeting her. There was not anything that made her happier than spending time with any, and all of her family.

First and foremost, Eunice was a woman of God.  She loved the Lord with all of her heart.  Outside of the Lord, her family was the most important part of her life.  Her hobbies included cooking, cleaning, crocheting or embroidery.  She spent countless hours making sure to make something for everyone.  Even in her final days, she finished making a blanket for a grandchild.

She was preceded in death by her parents Charles and Amy Hare, eight brothers, three sisters, and a great-grandchild.

There will be graveside service at Washington Cemetery in Wykoff, Minn., on Tuesday, August 4 at 1 p.m.  She will be laid to rest with her parents and other family members nearby.

Eunice may be gone in body, but she will forever remain alive in our hearts and spirits.