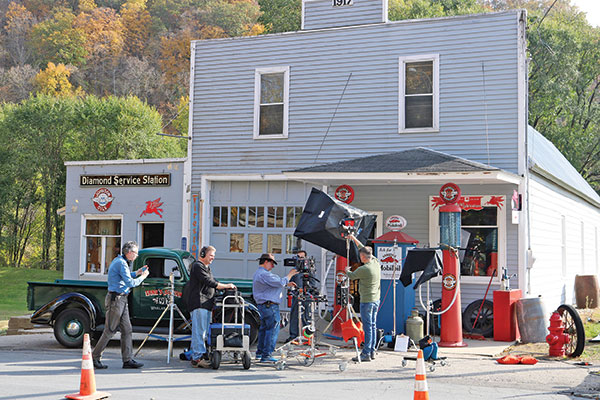 Ernie’s Station in Whalan, Minn., has drawn attention from local residents and tourists for some time.  Recently, it was noticed by the Executive Producer of Heritage Films, Matt Dacy who happened to be driving by with his wife when he came upon the vintage gas station and knew he wanted to film something there.  On October 11 they did just that.

Ernie Johnson purchased the station in 1993 and has been lovingly restoring it since.  The look and the feel of the station is from days gone by when life was very different, whether good times or bad times, of which there were both.

Ernie’s Station proved to be a perfect location for the documentary currently being wrapped up by Heritage Films.

“This will be one of a series of Mayo Clinic Heritage Films,” states Writer/Director Tom Williams. “We do films about the long and rich history of Mayo Clinic, about remarkable people and events from the last 150 years. This particular film will be a short film about Mayo Clinic during the depression and how they responded to that particular crisis and how it affected various people.”

There are four characters telling the story in the film.  One is a financial management person from the 1930s, another will be one of the Sisters of St. Francis who ran the hospital, the third will portray a young surgeon who had just completed a fellowship at the hospital and the final character, the person the actor in Whalan was portraying, is Jesse Baldwin.

“Jesse Baldwin was a man who came to Mayo Clinic in the ‘30s for surgery – they helped him, he didn’t have money to pay his bill.  He said, ‘They told me don’t worry about it, pay us when you can.’  He said, ‘All they were worried about was did I have the money to get home,’ and that made a big impact on him,” explains Williams.

Baldwin, who lost his job after the stock market crash, bought a gas station (which is how the connection was made to Ernie’s Station for the film). He then founded a company that produced oil filters.  That company, Baldwin Filters, became a very large manufacturing company.

When Baldwin was (possibly) in his 70s, he and his wife made a $5 million dollar gift to Mayo Clinic, which may have gone all the way back to those days when they told him to not worry about his bill, but pay when he could.

The couple’s tremendous gift greatly contributed to the construction of what would become the Mayo Baldwin Building.

“So it’s a lovely story from him, but we wanted to have the patient perspective as well, what is was like in the depression to be having hard times. People tended to put off healthcare, as they do in hard times;  but there are things that you just can’t ignore,” states Williams.

“This is a story of how Mayo helped people through that time,” he adds.

The day the filming took place in Whalan it was one of the last, if not the last, warm sunny fall days in Minnesota.  Other than dealing with more than a slight breeze, conditions were perfect for filming.

“We loved this location.  I was making sure we got this shot this week, because after the end of October there is no telling when we can shoot outside anymore,”  Williams commented.

Along with Dacy and Williams, the film crew consisted of Erik Hoover, a professional actor from the Twin Cities protraying Jesse Baldwin, and Director of Photography David Coleman.

Johnson never expected anything like this would happen when he was restoring the station, although he has had many visitors come to admire it over the years, including a group of those driving 75 Model As and Model Ts.  But, he thoroughly enjoyed the day and even became a crew member for the day!

“Ernie has been wonderful to work with on this, he helped us make the location very specific to the 1930s as much as he could. He’s been out here directing traffic and asking people to be quiet as they came by, so he has been a very, very valued member of the team on this production,” states Williams.

When asked what the name of the film will be, Williams noted it is titled “Mayo Clinic in the Great Depression.”  This film will soon be available for viewing, along with many others on the Mayo Clinic History and Heritage website at history.mayoclinic.org/books-films/heritage-films.php.  “There is a whole collection of films about Mayo history,” notes Williams.

If you ever find yourself in Whalan, and start to feel nostalgic, you may be at Ernie’s Station.  It is a special place that takes you back in time.  If you stop by to see Ernie’s Station, give yourself plenty of time.  Time to look at everything, and time for Ernie to share a small portion of his wisdom, grace and humor.  Also, do not miss a photo op with Ernie’s 1937 Plymouth, given to him by his Uncle Sam Sethre when he was in 10th grade.  Not many of these cars were made as they were only produced from 1937-1941.

“If we are here, we are open,” reads the sign on the door at Ernie’s Station.  It will be an experience that you will remember, both the station, and the man.