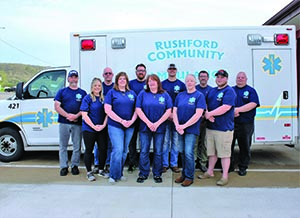 Emergency Medical Services — those professionals responding to crisis calls and both treating and transporting patients — are a vital part of our communities. So integral, we assume they’re just always there, willing and waiting in the wings when we need them. What happens though when there aren’t enough workers to do the job? In Fillmore County, these are volunteer-staffed services and sufficient workers are in short supply. While volunteerism has generally increased in the last decade, the numbers have peaked and are now starting to fall.

Rushford Community Ambulance Service has a dedicated team, but the struggle to find additional staff is real. “Right now, we have eight emergency medical technicians (EMT) and six drivers [five are emergency medical responders]. The quality of the service to our community and our primary service area has in no way changed, but we would be very thankful to have two or three, or more, EMTs on the crew,” says Director Lynn Humble. “It hasn’t been a problem for us until recently.”

There’s been a similar situation in Lanesboro, says Lanesboro Ambulance Director Deane Benson. The city dropped to just eight EMTs and three Emergency Medical Responders (EMR). Ideally, they’d like to have 20 on staff for the community and surrounding areas.

“If our service cannot cover a 24-hour schedule, we could be fined by the Emergency Medical Services Regulatory Board and could be downgraded to a First Responding service, which could mean we may not be able to administer medications for medical interventions,” says Benson. “We also could not transport so we would try to stabilize the patient until another ambulance arrived to transport. This would only add stress to another ambulance service.” Benson also worries that current EMTs and EMRs will get burned out and resign.

“We will have to do what we can with who we have,” says Humble, also concerned for the same reasons. “If we can’t find people to volunteer, people with medical problems or victims of accidents will have to wait for a service to come from another town or city. This means waiting at least 30-plus minutes depending on where they’re coming from — Winona, La Crosse, Rochester. Add to that the time it takes for them to find you, whether it’s in Rushford or in our primary service area. It’s not a pretty picture.”

Just why this shortage exists is up for debate by many sources. Busier lives and more intensive training and certification/licensing certainly factor into it. “Our service meets twice every month for training. The National registry and the state of Minnesota require 20 hours of that training split between cardiovascular, airway, trauma, medical, and operations,” explains Humble. “There are also local and individual requirements at 10 hours each for a total of 40 hours. Throw in skill competency with assessment for medical and trauma patients, airway management, bleeding control, splinting, CPR, cardiac arrest and spinal immobilization.” Done over two years, this all goes towards recertification for another two years as an EMT.

In addition to the 120 hours of classroom time and 40 hours of homework, Benson notes there’s the promotion of EMS week in May, fundraising, and other community events.

“People need to understand that we are not in this for the money. We are a volunteer service that does this for the community and those in our primary service area,” adds Humble. “Many times the job requires compassion, patience, empathy, and yes, even a strong stomach. We have to remember that the patient is someone’s mother, father, sibling or friend and do what we can to ease their pain and transport them to a facility where they can be helped. We’re doing it because there was a need.”

“They have to be able to connect with the patient on a one-to-one basis over a very short time period. Depending on which hospital the patient goes to, we have only 20 to 45 minutes to be with that patient and find out a history of their problem. There’s a need to make them feel as comfortable as possible and answer any questions they may have,” she adds.

“They learn to work hand-in-hand with others on the service. They need to know they are part of the service and think of the crew as a family and that they can come to any one of us for help with questions or problems that may arise.”

“I tell every member to remember that family comes first… their family. Many have young children, jobs that consume much of their time, so they don’t feel they can give that up,” continues Humble. “I totally understand this, but prospective volunteers need to remember that, if there were three, four or more EMTs on the service, they may only be on one weekend and one week per schedule. One can only hope.”

Both services are hoping to address the issue soon. Last year, the City of Lanesboro approved added incentives for its EMS volunteers. Benson held a well-attended town meeting this past January and it appears for them, the things might have started moving in the right direction. “Six people are ready to start the EMT coarse February 24 in Chatfield, pending council approval. Three or four more are interested in the fall course or taking the Rochester Community Technical course in the summer/fall. It’s started the ball rolling,” he says.

Rushford is looking for any volunteers, but EMRs in particular. Six applications, including one student, were recently received. “Right now, the City of Rushford will pay for the EMT class after you show an interest in becoming part of the ambulance service. You can do this by riding along on calls (a current American Heart CPR card is required),” notes Humble. “If you find it’s something you could do, the class is paid for by the city.” A written agreement for completion is required, along with scheduling commitments, or the participants must pay the city for the class cost. Once volunteers pass the National Registry of Emergency Medical Technicians test, volunteers will also be paid for emergency runs and training meetings that were attended.

“It’s hard, but rewarding work. It’s not for everyone, but there’s a satisfaction that comes from all the hours of training when a former patient comes up to you and says, ‘Do you remember me? You were with me in the ambulance when I broke my arm. Thank you for helping me.’ It shows that you made a difference in people’s lives,” adds Humble.

“This is a valuable community service that is struggling nationwide to keep going,” stresses Benson. “The only way it will continue is to have volunteers who are interested. Contact your city hall, stop by an ambulance facility, or reach out to an EMT you know and ask questions about what takes. This will probably be one of the most rewarding commitments they will ever make.”

Persons interested in the Lanesboro Ambulance Service can contact Deane Benson at lanesboroambulance@gmail.com or call City Hall at (507) 467-3722. Contact Lynn Humble at the Rushford Ambulance Service at ambur@acegroup.cc or by calling (507) 864-7577.