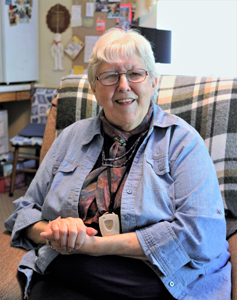 After living a full and meaningful life with someone, becoming that person’s caregiver is a role many of us have never considered, much less planned on.  Taking life day by day and having a positive attitude can help with the adjustment as Lilah Ellingson experienced in recent years.

Lilah Jane (Hildestad) Ellingson was born to Carl and Amelia Hildestad on March 17, 1935.  The large family of 12 lived on several farms in the area while Lilah was growing up and she attended the O’Hara County School, now located at the fairgrounds in Preston, until eighth grade then attended Lanesboro High School for one year.  After the family moved to rural Peterson, she finished high school there.

Lilah met Allen Ellingson through her brother Benny who was a friend of Allen’s and the two immediately hit it off.  After high school Lilah had plans to move to the cities and begin a career.

“Right after high school I was a working girl – I went to the cities and lived with my sister and her husband in St. Paul and had a job at the American Optical Company,” states Lilah.  “He came up there real often to visit,” she says, and after just three months she and Allen knew they were meant to be together and decided she was coming back to live on the farm in rural Lanesboro.

Allen and Lilah Ellingson were married on September 20, 1952.  They lived with his parents after getting married and they farmed together.

In the early 1960s Allen and Lilah moved to their own farm which is near where the Old Barn Resort is currently located.  During their farming years Lilah worked side by side with her husband baling hay and doing other chores, while also taking care of the children, maintaining their home and feeding her family and at the same time was working as many hours as she could at the White Front Cafe in Lanesboro and then later at the Victory Cafe in Preston.

The couple had four children including Gary, Marcia (Einck), Scott (Karrie) and Pauline (Mike) Wangen.  Sadly, Gary passed away in 1970 at the age of 16 in a tractor accident off their farmsite.   Sometime after that, Allen got his hand caught in a corn picker and lost four fingers of his right hand sparing only his thumb.

“It was hard to be farmers anymore,” explains Lilah.  So, after many years on the farm, in 1978 they had a farm sale and invested that money into purchasing a building in Lanesboro where they opened Ellingson Clothing on the main floor and made the upstairs their home.

“That building happened to be the same building that years before had been his mom and dad’s and they had the grocery store there,” notes Lilah.

“At first Ellingson Clothing was a good business in Lanesboro – people were happy there was that kind of store in town – then times changed – and people went shopping in larger towns,” Lilah explains.  “We didn’t survive very well,” she states.

After eight years of running the clothing store, they closed the store and sold the building in 1986 and purchased a home in the “Little Norway” neighborhood of Lanesboro.

While running Ellingson Clothing Allen additionally worked part-time doing road maintenance for Carrolton Township and was also a part-time bartender at Rose’s Friendly Inn in Lanesboro and continued that employment for a few years after moving to Little Norway until he fully retired.

From 1986-2000 Lilah worked at the former Rush Products in Rushford, then at Das Wurst Haus in Lanesboro for three consecutive owners of the business until retiring in 2006.

The couple was active in the community and their church.  Along with several others, they were involved in getting the Lanesboro softball field back to usable condition many years ago after it had grown over with brush and hadn’t been used for a long period of time.  They repaired fencing and lighting with what they had between them.  “Nothing was new back then,” she states.

As Allen’s health began to deteriorate, Lilah began taking on a heavier load around the house and eventually became his caretaker.  Having a bad back from previous injuries on the farm, the physical work of being a caretaker soon started to take its toll.  After fracturing her sacrum in 2015 she could no longer care for Allen.

“That’s what happens with a lot of caregivers – they forget to take care of themselves,” Lilah says.  “You don’t have time to take care of yourself,” she explains.  Allen then received some in-home care, which Lilah was very grateful for.   Shortly thereafter Allen’s health issues became more than could be handled at home.

After Allen had been ill at home for four years, in March of 2015, Allen and Lilah moved into Park Lane Estates Assisted Living in Preston.   Just a short time after, on April 18, 2015 Allen passed away.

“We had talked that I wouldn’t be able to go back to our home in Little Norway by myself,” explains Lilah. “I’ve decided that this is what I have to do, and I am comfortable, and I feel secure and safe and it’s fine that I’m here,” she states, and her family feels assured knowing that she has 24 hour assistance if needed.

“Becoming a senior citizen is just a natural thing,” Lilah comments.  “If you’re not able to take care of yourself in your own home then assisted living is the place to come to,” she says.

Three meals a day, laundry service, group activities and group outings, musical entertainment and more.  She also enjoys going out with family members often whether it is out to eat, shopping or anything else they surprise her with.

Lilah is pretty tech savvy as well and loves to stay connected with people on her smart phone through Facebook. Another hobby she enjoys is spending time working on her most recent “doodle book” where she draws intricate and colorful pictures.  Having filled one doodle book already, she is now busy filling her second and she and her family enjoy spending time looking through the book together.

Lilah’s words of advice for seniors or those who may be creeping towards senior citizenship is to have a positive attitude and gain acceptance. “This is home now,” states Lilah.