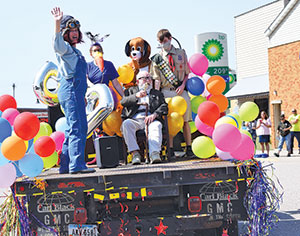 There were 50 films introduced, but at age 90, the main attraction to many was seven-time Emmy Award winner Ed Asner. The acclaimed guest of honor flew halfway across the country for the first annual Spring Grove International Film Festival. The three-day event experienced rain during the mostly indoor showings on Friday and Saturday (September 11 and 12), but on Sunday, a sunny sky greeted all in town for the parade and the live, outdoor-staged reading of a musical The Dream Café, featuring Asner.

Playwright, actress and festival organizer Katie O’Regan is the Director of Development at Giants of the Earth Heritage Center in Spring Grove.

One outdoor viewing of Asner’s work in the animated Pixar hit Up, was postponed a week until Saturday night, September 19. During a pandemic, most local patrons opted for at-home, virtual viewing, but several film directors convened to discuss their craft.

Asner, past president of the Screen Actors Guild, is most known for portraying the grumpy news editor Lou Grant in the Mary Tyler Moore Show, which won 29 Primetime Emmy Awards, including Outstanding Comedy Series for three straight years (1975-1977). With that show set in Minneapolis, Asner and his wife were also parade celebrities in the St. Paul Winter Carnival during the second season of the television classic.