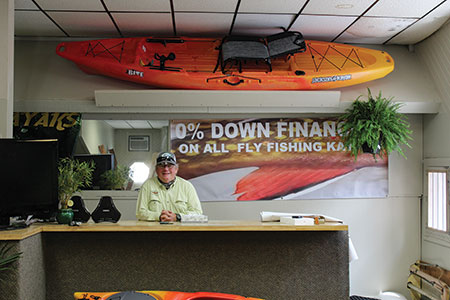 Mel Hayner has owned and operated The Driftless Fly Fishing Company in Preston since 2013, and recently expanded his business to include a dedicated space for kayaks. “They were in the way over here,” he said. When the opportunity came up for him to rent the empty building next door, which used to house Chic’s Pizza, he decided to go for it. “It was always in the back of my mind,” he explained. “It was time to do it.” Over the past seven years, his shop has grown and gotten busier, and he was ready to move the kayaks to a bigger space.

Hayner is originally from Oregon, but has lived in Minnesota for 30 years now. He began fishing in the Preston area 25 years ago and has been guiding others in how and where to fish since 2004. “It’s kind of a lifetime sport,” he said about fly fishing. “You’re always learning when you’re doing it.” Hayner noticed that despite being the Trout Capital of Minnesota, there was no fly shop in Preston, so when a building became available in his price range, he decided to open his own. “Preston was very welcoming to me,” he said. “I like the town.”

Hayner employs three fly fishing guides to help him run the shop: his sister Monta Hayner, along with Brennen Churchill and Tim Carver. The Driftless Fly Fishing Company received guide endorsements from Orvis, a world leader in fly fishing. “That brings us some exposure on their catalog and website which draws people from all over the country,” Hayner explained. “People know that it’s quality service if you have the Orvis endorsement.” In addition to guide services, the Driftless Fly Fishing Company also offers a free Beginner 101 fly fishing class every other Saturday.

Hayner has been selling kayaks in his shop for four years now and is excited to have more space for them. He also plans to move boating gear such as life jackets over to the new section and is working on setting up displays for the kayaks he has in stock now. The kayaks are available for sale or rent and the beauty of that is that customers can rent a kayak and try it out before deciding if they want to purchase one. Hayner also offers a shuttle service for people who have their own kayaks. The Driftless Fly Fishing Company holds dealerships with Jackson Adventures and Wenonah Canoe Company and all of the kayaks are made in America and are top of the line.

Since he didn’t have to do much for renovations, it only took Hayner a few weeks to get the kayak shop ready to go after renting it in the middle of May.  The soft opening date was June 1 and the grand opening will take place on July 4 with some promotions to celebrate.

Despite the challenges of COVID-19, Hayner isn’t worried. There has been a surge in the sale of fishing licenses and he is seeing that translate into business for his shop. “It’s something where you can social distance and still be outdoors,” he said, adding, “that once you have the supplies and gear, it’s not a very expensive hobby.” Hayner spent a lot of quality time fly fishing with his kids when they were growing up and loves seeing other families do the same. “We pay it forward by helping families make those same memories I made with my kids,” he said.

The Driftless Fly Fishing Shop is open seven days a week and the kayak shop is open Friday through Sunday, although if someone is interested in a kayak during the week, Hayner is more than happy to open the shop for them. You can learn more by calling (507) 765-4915 or visiting www.minnesotaflyfishing.com.