Immersed on a farm south of Spring Valley, the Apenhorst family can be found working with their hobby of Belgian Draft Horses. Lynn Apenhorst takes pride in grooming and driving their Blond Belgians as well as working at the Rochester International Airport and farming, while his wife Lisa (Paulsen) Apenhorst is employed at the Kingsland High School as a paraprofessional. These jobs give them the freedom to focus their summer schedules on draft horse shows. Along with their daughters Jackie and Heather, this family is generally involved with a variety of draft shows and a handful of holiday events where the gleaming tack, shiny wagon and well-groomed teams are ready to go.

“In our leisure time, after the crops are in and the first cutting of hay is baled, it is time to harness the draft horses and practice for the upcoming draft horse shows across Southern Minnesota and Northern Iowa,” comments Lisa. “Our circle driveway is our practice ring and when I hear the clip clop of hooves on the pavement, I know it is time to grab the camera to catch shots of Jackie, Heather, and Lynn atop the wagon with lines in their hands.”

This has been a family hobby of the Apenhorsts for the past 25 years, yet it actually began in the early ‘80s when Lynn pulled into the Olmsted County Fair for the first time with his red 5th wheel rubber-tired wagon to show with teamster Everett Hildebrandt from Waverly, Iowa.  Lynn’s love for this hobby stems from both his grandpas, Marvin Blume and Raymond Apenhorst, teaching him about farming with draft horses.

When Lynn was starting out competing at plowing contests at age 12, he never imagined how important it would be for him to marry a woman who shared his love of Belgian horses and being involved with all the activities which came with his passion. In 1994, Lisa dove right in, assisting the Apenhorst hitch in every aspect from preparing meals for the crew to getting the horses ready for competitions.

She remarks, “I loved showing from the start since I have a knack for designing western show clothes for the girls and myself, decorating the stalls and prep area in the barn at the shows, and learning to drive cart with a single horse and a team hitched to the show wagon.”

Lisa is also an avid photographer, who loves to hide behind the camera, documenting history being made in the show ring. Being born into the hobby, both Jackie and Heather love draft horses and showing! “The girls were six and five years old when they took the lines and first drove in the Junior cart competitions in Austin and Kasson,” Lisa remembers with pride. “Showing halter classes and riding bareback for the egg and spoon game soon followed. Jackie and Heather have also followed in their dad’s footsteps and have mastered Roman riding on the backs of a team of trotting horses in the round pen and can handle driving six hitched to the show wagon with ease.”

Draft showing is one of the friendliest competitive hobbies ever and that is one reason the Apenhorst family loves it so much. “The comradery of draft horse families during a show is heartwarming,” explains Lisa. “Many times, when both girls were showing Junior team at the same time, we would borrow a wagon from a competitor and one of their teamsters would accompany one of our daughters in the arena. Years later when teamsters had multiple young children showing, we then lent our wagon and carts and our grown daughters accompanied their Junior drivers. When a piece of equipment is broken in the arena, a driver can be assured teamsters from other hitches will be sharing their equipment to fix whatever is broken.”

Still the competition is intense with every hitch seeking the trophies and ribbons awarded. The Apenhorst Family has several rooms lined with acknowledgements of the ways they strive for excellence. Even so, Lisa admits, “When Tracy (Schrieber) Wolf won Ladies’ Cart at the Olmsted County Fair for the first time, I was so excited for her that my tears were flowing for her, even though I was competing against her. The comradery of draft horse families is shown from coast to coast.”

The Apenhorsts have been showing at county fairs through the years, including Olmsted, Dodge, Mower, Freeborn, Fillmore, Jordan and Steele as well as Minnesota and Iowa State Fairs. Shows are also commonly scheduled for Slayton, Minn., Mason City and Britt, Iowa, and even the National Stock Show Denver, Colo.

In 2009, Lynn and Lisa were asked to become superintendents of the Olmsted County Fair Draft Horse Show in Rochester. “We agreed to this responsibility so that the show could continue entertaining the draft horse enthusiasts of Southern Minnesota.”

Lisa and Lynn are pleased to see their daughters venture out and show in Indiana, Wisconsin, Florida, Utah, Illinois, Oklahoma, South Dakota, Michigan, Georgia and into Canada with other hitches. “This truly is a family hobby that has stuck with our girls and has impacted their lives with strong work ethics and positive worthwhile friendships.”

Although the worldwide pandemic has cancelled most shows and other events on the 2020 schedule, Britt, Iowa, did host a show. “This year marked Lynn’s 35th consecutive year of showing at the Britt, Iowa Labor Day Weekend Draft Horse Show,” exclaims Lisa. “We were elated to be able to shoe the horses, pack the semi and horse trailer and travel to Britt. The hard work of getting in and out of the show ring is nothing compared to the friendships and everlasting memories that have been made over the years of this beloved family hobby.” 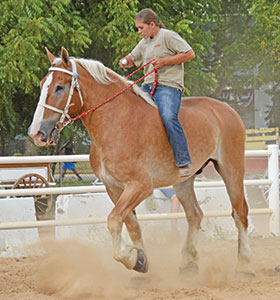 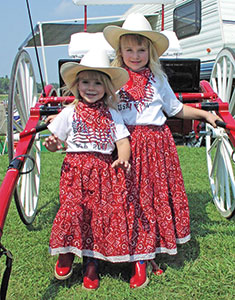