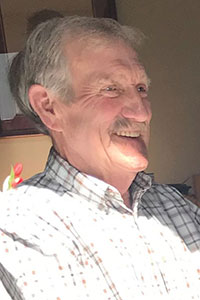 He was born September 11, 1945, in Decorah, Iowa, and grew up in Canton, Minn., where he graduated in 1963. He then enlisted in the U.S. Air Force, serving from 1963-1967. Douglas was stationed at Eglin Air Force Base in the 4420th Civil Engineering Squadron at Hurlburt Field, serving RED HORSE units in Southeast Asia and the SAWC. He was proud to be part of the Special Forces Operations creating airfields and training field officers for combat in the Vietnam War. He was a patriot and loved this nation dearly.

Doug spent many years as a business owner in the construction industry, employing and teaching many the value of hard work and the art of masonry. After 35 years in the trades, Doug became the facilities coordinator at Calvary Evangelical Free Church, applying his knowledge of buildings and organizational skills before retiring in 2015. Throughout his life, he enjoyed many genuine friendships and loved to have coffee, visit, tease, and “give a bad time” to those he loved the most. He was involved in youth ministries and had a passion for helping kids become their best. He went on four mission trips to the Dominican Republic, building churches for Iglesia Nueva Vida and sharing his construction knowledge and talents. He was also heavily involved in the construction of the Rochester Soldiers Field Memorial.

Doug’s other interests and hobbies included woodworking, coin collecting, and his favorite adventure of gold prospecting, traveling to Colorado, Georgia, Alaska, and California. He was a friend of Bill W. and shared his story in meetings in the community, helping countless others live their best lives. He hosted AA meetings for inmates at the Federal Medical Center for 12 years; his compassion for others’ lives was endless. He attended Autumn Ridge Church, especially enjoying the Wednesday men’s group.

In 1970 he met and married Rita (Wax) Kelly, and they celebrated 50 years of marriage on June 27, 2020. He was a family man and rarely missed a gathering. Doug’s interest in family genealogy and his Irish roots drew him to tracking the family tree and traveling with Rita to Blacklion, Co Cavan, Ireland. He enjoyed all sports, following his sons’ college football careers and rarely missed a home game. He also enjoyed following his nieces’ and nephews’ sports.

Funeral services were held 11 a.m. Friday, September 4, 2020, at Autumn Ridge Church, Rochester. Visitation was 4-7 p.m., September 3 at Ranfranz and Vine Funeral Home 5421 Royal Place NW, Rochester, Minn., and one hour prior to the service at the church. Interment took place at Calvary Cemetery in Canton, with full military honors. Memorials may be directed to Autumn Ridge Church/Student.