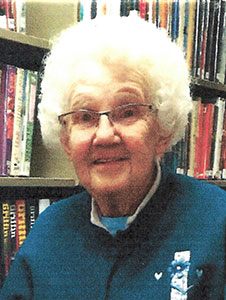 After graduating high school in 1946, she attended Winona State University where she got her two-year teaching degree. She married Clarence (Buddy) Johnson in 1948 and to this union they were blessed with seven children. They moved to Austin where Clarence worked for Standard Oil and Donna taught at Blooming Prairie. They moved back to Mabel after several years. She taught in Riceford and Newburg for many years and home-schooled students because of medical reasons. She received her four year teaching degree after several summers of summer school. She taught at Mabel-Canton for 28 years in fourth grade and Title One. When her youngest daughter went to Winona State, she joined her in the summers to get her library degree. She was in the Mabel-Canton library for 12 years. She mentored many children for more than half a century. She retired in 1994 and in August of that same year, the city of Mabel asked if she would be interested in managing the Mabel Public Library. She was there for 25 years. She received a certificate from the governor for being the oldest living librarian and had an interview from a local TV station and many local papers. She was asked one time about how she lived so long and she said that being involved with kids all her life all seem to be her fountain of youth.

She has been a part of may organizations in Mabel, like the VFW Auxiliary, American Legion, Lions, Mabel First Lutheran Church, WELCA, library club, delivered Meals on Wheels to those younger than herself. She was also a regular at almost every indoor high school sporting event as well as band and choir concerts. She and a former teacher friend of hers, Lorraine Kingstad, received Boosters of the year from the Mabel-Canton school and were also Grand Marshals in the Steam Engine Parade. She was also honored a second time for the Grand Marshal in 2019 Steam Engine Days Parade as a longtime educator and librarian,

Our mother was a very warm and compassionate women. She taught us all that family is more important than anything else. Her work as a teacher and librarian was her passion. It was not work for her. She enjoyed getting up every day to do something she loved. She taught all of us that the more you give the more you will receive in return.

She was preceded in death by her husband Clarence (Buddy) Johnson, her parents Lester and Alma Sinclair, her inlaws Edward and Isabel Johnson, her sister and brother, and one great-grandson, Adler Steven Darrington.

A private family services will be held at the Mabel First Lutheran Church in Mabel.  The Mengis Funeral Home in Mabel is assisting with arrangements.