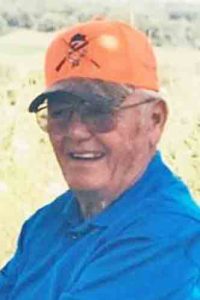 Dr. Donald Boyd French died peacefully on September 3, 2022. Don “Doc” French was born January 13, 1929, in Tracy, Minn. He moved to Rochester with his family in 1936 and attended Rochester High School, where he played baseball and hockey. He was a member of the 1946 state runner up hockey team. From the age of five, he knew he wanted to be a veterinarian after hanging around the local vet in Tracy, Minn.  Even in junior high and high school, he worked for a Rochester veterinarian at every opportunity.  He attended the University of MN College of Veterinary Medicine and received his Bachelor of Science degree in 1951 and his DVM degree in 1953.  Don was a member of the third Veterinary class to graduate from the university.

He married Isabelle Leona Schulz on August 18, 1951. Don practiced veterinary medicine with Dr. Thurber in Rochester for a short time before moving to Chatfield and launching the Chosen Valley Veterinary Clinic in 1955. He said he could starve to death just as well on his own instead of working for someone else!

In 1959, Don and Isy built a home just outside of Chatfield that served as the vet office as well as home to the couple and their three kids, numerous cats, dogs, horses, and an abundance of “adopted” kids. Doc worked out of his home office for 17 years. The practice grew and additional veterinarians were hired. In 1971, the office was moved out of the house and to downtown Chatfield where it continues today. Don retired from being on call for Chosen Valley Vet Clinic in 1989, but continued treating horses until hanging up his hat in 1996. Doc’s practice included both large and small animals, but he particularly loved working with horses. He was also commonly seen with an intern in tow providing the next generation of veterinarians with some real world experience, as well as influencing his oldest son Dennis and his granddaughter Hilari to also take up the profession of veterinary medicine. Don and Isabelle also created the Dr. Don and Isy French Large Animal Medicine Fund to provide equipment upgrades, clinical outreach and research to the U of MN College of Veterinary Medicine.

Not only did he love his work with horses, but horses were also a hobby of his and the entire family.  Don judged many endurance and competitive horse rides (100-, 50-, 25-mile rides judged on time and conditioning of the horse) across the Midwest. He had the entire family involved in training horses and riding in these events as well. In addition to his love of horses, Don was an avid pheasant and duck hunter and enjoyed training and using his hunting dogs, which were also the beloved family pets.

Don was very active in his community and faithfully served the Pioneer Presbyterian church, acted as a director for the Root River and Fountain State Banks for 42 and 34 years respectively, served on the school board, was a firearm safety instructor for 20+ years, a trap team member, and he considered the Chatfield Fish and Game Club his second home. He also served the community as a volunteer for Meals on Wheels and was active in the Chosen Valley Student Loan Fund, Lions Club and Future Farmers of America.

Don was an avid supporter of Pheasants Forever and Ducks Unlimited.  He and his wife Isabelle loved the outdoors and wildlife and have donated a large portion of their property to the MN Department of Natural Resources as a home for wildlife and so others can enjoy the beauty and peacefulness of the outdoors.

Besides his parents Harry and Marjorie, Don was preceded in death by his wife of 70 years, Isabelle, his sister Betty and fourbrothers-in-law.

Visitation will be from 11 a.m. to 1 p.m. on September 28 at Riley Funeral Home in Chatfield, Minn., with a service to follow. Donations to Dr. Don and Isy French Large Animal Medicine Fund at the University of Minnesota College of Veterinary Medicine, Ducks Unlimited or Pheasants Forever are requested in lieu of flowers.