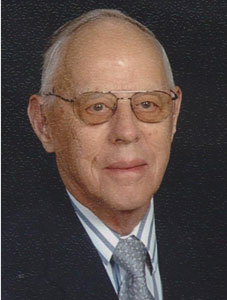 Donald was born August 6, 1926 in Wykoff, Fillmore County, the son of Arthur and Delia (Hall) Schultz. He graduated from Wykoff High School. He married Elizabeth Schroeder on April 20, 1947, at the Pleasant Valley Lutheran Church in rural Racine, Minn. They lived in the Wykoff area most of their lives before moving to the Evergreen Estates in Spring Valley, Minn., in 2011. Donald started milking cows while still in high school. After graduation he started farming until he was drafted in the Army in 1945 to Japan and Okinawa, also playing in the Army band. When he came back home from the Army, he purchased a farm east of Wykoff. After farming, he went to Texas for a year with ABS and returned to Wykoff. He then started livestock trucking until he bought the oil business in 1968. He retired from that in 1989. He was a member of the American Legion for 67 years, active in Wykoff Senior Citizens, Wykoff Lions Club, and Immanuel Lutheran Church in Wykoff. Donald was honored to travel to Washington, D.C. on the Honor Flight in 2010 with his son Steve. He was proud of his service to his country. Donald and Elizabeth enjoyed their 17 winters in Arizona. After retirement, he enjoyed reading and going on walks. His family, friends, and community were very important to him.

He was preceded in death by his wife, Elizabeth, his parents, step-mother Irma Schultz, step-sister Carol Schwier, and step-brother Ron Murray.