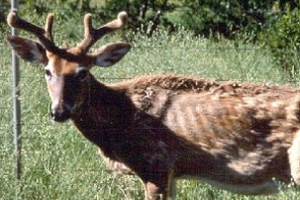 “Right now, it looks like we’re on the front end of this,” USDA District Supervisor and Wildlife Biologist John Hart said about the 2016 discovery of Chronic Wasting Disease in Southeastern Minnesota.

After two deer near Lanesboro and Preston tested positive for Chronic Wasting Disease last fall, the Minnesota DNR placed a recreational feeding ban in Fillmore, Mower, Olmsted, Houston, and Winona counties.  They also opened a special hunt that went from December 31 to January 15 which included a mandatory testing for CWD.

The goal of the special hunt was to get samples from 900 adult deer over the age of 1.5 years.  When the special hunt only yielded around 775 deer, the DNR put the second part of their plan into action, utilizing their USDA sharpshooting contract to complete the harvest.

Hart is heading up the USDA sharpshooters in the Fillmore County area.

“We mostly do wildlife damage and work from a disease surveillance standpoint,” he explained.  For example, the Wildlife Services department of the USDA has dealt with beavers building dams that caused damage to water and roadways and wolves attacking livestock and pets.

“My sense is that this is the only thing that could be done at this point to get a handle on it,” Hart said concerning the DNR’s plan of action for containing and eliminating CWD.  “The concern is that if this waited another year or two, the Chronic Wasting Disease could expand out of the concentrated area it’s in right now.”

Seven deer tested positive for CWD during the special hunt, bringing the total of infected deer in the area to nine.  The USDA sharpshooters have harvested just over 100 deer since they began their contract on February 20.  So far, none have tested positive for CWD, but as Hart pointed out, many of the samples are still pending results.

Most of the nine infected deer were shot in Carrolton Township.  Six of them were bucks and three were does.  The sharpshooters are concentrating their efforts in that area between Preston and Lanesboro.

One of the deer was found dead instead of being shot and was in poor body condition, indicating severe advancement of CWD.  The DNR ran a full body necropsy and found prions in the deer’s tonsils.

“That ratchets up our concern where that dead deer was found, so we’re really focusing our attention there,” Hart explained.  “I think we’re still on the front end of this infection as the rest (of the deer) appeared healthy.”

Most of the sharpshooters working for the USDA are from Grand Rapids and are employed seasonally.  The crews working the Fillmore County area and staying in Preston have been rotating in and out on a 10 days on and four days off schedule.  They have also been receiving support from DNR staff based out of St. Paul.  Due to their closer proximity, they’ve been able to work for three to four-day shifts to fill in the gaps as needed.

Prep work for the sharpshooting project began in early February with a lot of work going into setting up contacts with landowners, prepping equipment, and staff training.

Baits are put down to concentrate the number of deer in an area and put the deer in a safe shooting environment, which allows the sharpshooters to better accomplish their job.  “We try to be as low-key as possble,”  Hart said.

Most of the harvesting is done at night or in the late afternoon.  The sharpshooters use thermal imaging, which allows them to see the deer’s heat signature.  “It’s a good way to find deer to target and adds an element of  safety because we can see better at night with it,” Hart explained.  They also have night vision scopes on their rifles.

After being shot, the deer are transported to Preston so that the DNR can take samples and store them in a refrigerated trailer.  If the samples come back negative for CWD, the deer are either returned to the owner on whose land they were shot or made available for public distribution.

So far, the USDA Wildlife Services has not been given a specific end date for their contract with the DNR.

“The DNR has told us for sure to go through the 10th or 11th of March and potentially through the 19th,” Hart said. “It depends on a lot of factors, but mostly on deer numbers like if we collect enough deer to make it worthwhile to have us here.”

“I’ve really been impressed with the people in the area,” Hart noted. “We’ve had good cooperation from the landowners, business owners, and the people in the community.  It’s really an unfortunate situation that CWD was found here, but you have a really sensible local population that understands the need for this project and has been supporting it.”

“Because there’s CWD in Iowa and Wisconsin, I think Southeast Minnesota will always be a focal point for surveillance for the DNR, but whether our (USDA Wildlife Services) participation is required again or not really remains to be seen,” Hart said.

Hart expressed his appreciation of the local communities for allowing his team to their work.  “I want to remind folks that they can play a big part of this next fall during hunting season,” he added, explaining that the DNR will want to continue to take samples to ensure that CWD has been eliminated from the area.