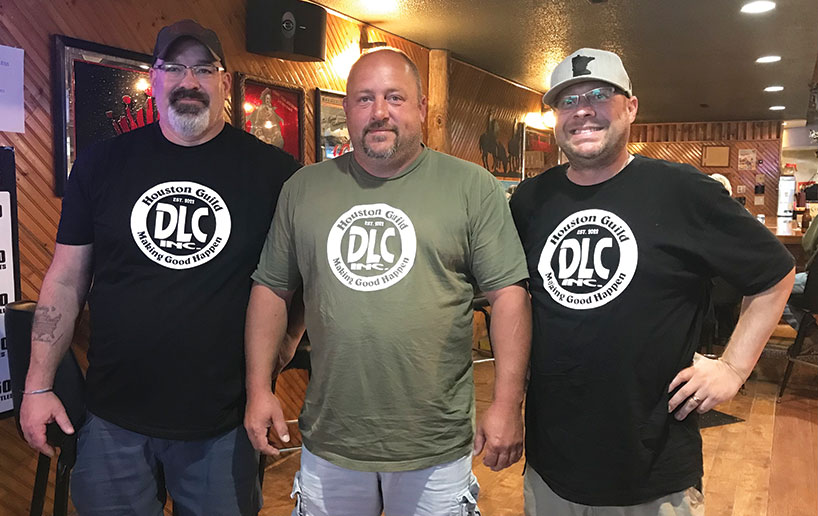 In February 2022, a Facebook post asked for someone to help to continue the fireworks for Houston Hoedown. Apparently, no one else wanted to take on the project originally started by Greg Lemke years ago. Three local businessmen, Dusty Franzwa, Luke Meyer, and Chris Schroeder, decided to step up and help. They knew the Hoedown fireworks were always a big draw to town on Friday night; after three years of no fireworks, it was time to include them in Hoedown again.

As they began working on the fundraising for fireworks, they encountered a big hiccup. In order to run a gun raffle fundraiser, they needed to become a 501c3. Until they did so, they would not be able to receive funds from other 501c3 groups either. With Caledonia attorney Mike Murphy’s guidance, they “didn’t mess around” and navigated the process to become a 501c3 after a few delays from the state processing.

Needing three people to qualify as a 501c3, the trio quickly came together and formed DLC Houston Guild. Meyer’s father suggested “guild” to describe the three; once they researched the word, they decided it was just perfect to describe them. According to Webster’s, a guild is “an association of likeminded people with similar interests or pursuits.” The three businessmen were indeed like minded with the same goals.

Dusty Franzwa owns Greenworx Lawn and Landcare as well as Big Tine Processing, a meat processing company. Luke Meyer owns and operates JT’s Corner Bar and Grill, and Chris Schroeder owns and operates Schroeder Heating and Cooling. While everybody knows the three businessmen, the community does yet know that they comprise the DLC Houston Guild. The guild’s logo explains their goal — “Making good happen.”

DLC patterned themselves after an earlier Houston group called Mafia 511 (so named because five people started the group and then another and another person joined them.) The group had a mission to help local people while keeping the money in town by hiring local businesses to do any resulting work. DLC reinvests the funds raised locally as they make good happen.

The guild first went to work on fundraising for the Hoedown Fireworks. Once they achieved that goal, they shifted gears to help others. When Houston native Scarlet Nelson was diagnosed with infantile fibrosarcoma cancer, the guild stepped up to help the family now and in the future.

DLC decides who they help; they “cut through the B.S. and just help.” They support athletics for kids and families with illnesses. When the school ball teams were fundraising for a new indoor batting cage and fell short of their goal, DLC donated the remaining $2,000. They had asked the teams what they had done to raise the funds. DLC feels the people requesting help need to do something as well. They offer “a hand up — not a handout!”

The guild has donated a gun to another area fundraiser put on by the Country Climbers Snowmobile Club. Dusty Franzwa shared that these were longtime high school friends of his who in turn had contributed to the Houston gun raffles.

The guild urges other communities to create similar groups. Their suggestions for groups starting out is to, “Be dedicated, patient, work together, and be like minded individuals.”

Luke Meyer shared that the smiles of the recipients of their fundraising is the greatest reward they could ever imagine.

DLC will be running a summer gun raffle fundraiser which will be held June 25 at 4 p.m. in the community center. The family event will begin with a $5.00 brat feed. In addition to the awarding of the presold raffle ticket prizes, there will be prizes for every kid in attendance — hats, shirts, a .22 gun, multiple target throwers, and gun cases. Other guns will be raffled using 100-square boards. Participants will choose a number on a board with 100 squares; a tossed ping pong ball will select the winner.

You’ll see the support of the DLC families as they turn out to help at the June 25 events, dressed in their matching guild shirts. Franzwa said that there are no plans to change their fundraising; referring to the gun raffles, he declared, “In reality, this works. The only thing we might change is to add more things to do!” He stressed that the community is a hunting community that respects guns.

Dusty Franzwa declared, “Now we just need people to show up on June 25!” The DLC Houston Guild encourages residents in area communities to join them in their effort — making good happen!