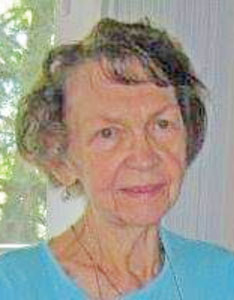 Deloris E. Olson went to be with her Savior on October 7, 2019, while a resident at Gundersen Harmony Care Center in Harmony, Minn.

Deloris was born on March 20, 1932, in Braham, Minn., to Edwin and Ruth (Lindberg) Grundberg.  She graduated from Cambridge High School in 1950. In 1954, Deloris joined a year-long mission trip, called “God’s Invasion Army.” During her trip, Deloris traveled along the Eastern Coast spreading the Good News of the Gospel.  On December 1, 1973, Deloris was united in marriage to Rossmer Olson at the King of Glory Lutheran Church in Eden Prairie, Minn. She had a beautiful singing voice and could sing harmony as well as play several instruments such as the piano, organ, and accordion. She enjoyed reading her Bible, playing the piano and organ at church, and sang in the choir. Deloris’s faith was a central aspect of her life, as she devoted her life to Jesus Christ.

She was preceded in death by her parents, sisters Miriam Barrett and Helen Soares, and brother Richard Grundberg.

Online condolences may be left at www.Hindtfuneralhomes.com.