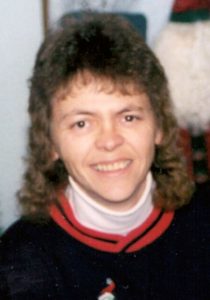 DeeAnn was born September 28, 1962, to Willis and Mavis (Benson) Skadsem in Waterloo, Iowa.  In 1965 they moved to a farm in Black Hammer where she grew up.  She attended school in Houston, Minn., and was baptized and confirmed in Black Hammer.  Dee lived in Spring Grove, Rushford, and finally in Mabel, where she and her sister Joyce bought a home together.

DeeAnn worked at several jobs, including Rush Products (TRW), Northern Engraving, and Watkins, and was a caretaker for her sister Joyce.  She enjoyed working and couldn’t wait to go back to work until she was old enough to retire.

She enjoyed going out to the Otterness farm to see her nieces every week and let her dog Sparky run around, going to play bingo and eating her supper before or during bingo (because she didn’t like to cook) with her special friend Elaine, driving around Mabel in her golf cart and giving Sparky a ride, driving around in her Challenger (which she only drove on special occasions), taking drives with her special friend Jan, always trying to make or fix things, laughing about our childhood experiences (good and bad), and just enjoying a simple lifestyle was what made her happy.

DeeAnn was diagnosed with pancreatic cancer in June 2021.  She died at Gundersen Lutheran Hospital on May 5, 2022, at the age of 60.

She was preceded in death by her parents Willis and Mavis (Benson) Skadsem, a brother, Randy; a sister, Joyce; and grandparents Melvin and Elida (Olafson) Skadsem, and Gynther and Muriel (Englehart) Benson.

A special thank you to Elaine White who stayed with Dee during her illness and took very good care of her and her dog, Sparky, to Jan Bublitz who worked, bowled, and with whom she just had fun doing things together; to Mark Schulte for helping out with the lawn maintenance, and to “the kids” who were there to help her out whenever she needed it.

Memorial service was held 11 a.m. Thursday, May 19 at Faith Lutheran Church in Black Hammer, Minn., with Pastor Leonard Liptack officiating. Burial took place in the church cemetery. Visitation was one hour prior to services at the church.  The Mengis Funeral Home in Mabel assisted with arrangements.