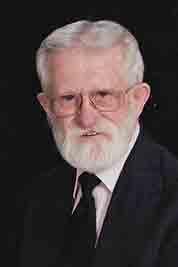 Dean Lavern Alden was born to Wesley and Viola (Kaus) Alden on November 3, 1935, in Clear Lake, Iowa. He moved to LeRoy, Minn., at the age of 15. Dean later went to work for the Preston Creamery, where he worked for a total of 27 years. He took two years off to serve in the Army where he served in the 82nd Airborne Division. He made 16 jumps and served in Munich and Augsburg, Germany for 16 months.

On January 14, 1961, he married Lois Koch, and to this union three sons were born: Paul and the twins Wesley and Donald. Dean loved horses. He rode in parades and did trail riding. He was also into demo derbys. He drove for many years and won many trophies. Dean and Lois lived in the country most of their lives and took care of a variety of animals such as goats, lambs, baby pigs, dogs, cats, horses and colts.

He was preceded in death by his parents, brothers Donald and Duane, sister Sherill, nephew Bruce, and mother-in-law Myrtle Koch.