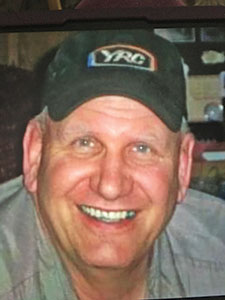 Visitation at Henrytown Lutheran Church will be at 2 p.m. on Saturday, April 17.  The funeral will follow at 3 p.m.

David Donald Haug was born on December 26, 1960, to Don and Marie Haug of LeRoy, Minn.  He met the love of his life, Bonnie Mehrkens from Zumbrota, Minn., in April of 1996, while delivering Amish to the Express Office in Rochester where Bonnie worked.  Dave and Bonnie were married October 15, 1999, at the home farm in Henrytown, where they lived to this day.

Dave was an extremely hard worker all his life.  He hauled milk for the Amish since he was 16 years old, to the Granger Creamery for processing.  Dave had many Amish friends, and loved transporting them wherever they needed to go.  They knew Dave was there by the honk of his horn.  Dave drove most recently for Roadway and ABF until three years ago when his health declined.

If Dave wasn’t sitting in front of the TV sucking on lemon drops, he could be found grading the driveway, mowing the lawn, taking care of animals, chopping wood, making maple syrup, or taking a nap.  In general, Dave just wanted the farmhouse and yard clean and looking good.

Dave just loved to drive.  So much so, he was infamous for the death of about 50 deer and who knows how many cars.

Dave was preceded in death by his parents Don and Marie Haug, and his sisters Kim and Deann.

Dave is survived by his wife Bonnie of Henrytown, children: Bernie (Monica) Payan of Rochester, and Kimberly (Scott) Fett of Elma, Iowa.; his grandchildren Lilly, Manny, Cody and Brady.  Dave is also survived by his brother Cameron (Debra) Haug.

Dave loved all of his nieces and nephews, especially a very special little squirt named Aubree Rose.  Dave loved so many people and they loved him too.  He was such a good, gentle giant of a man.

The family would like to thank all the Mayo doctors, Methodist 10-2 nurses, PCAs and hospice for their time and great care.