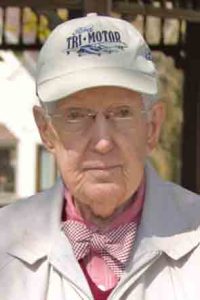 Darrell W. Sinclair, age 95, of Spring Grove, formerly of Mabel, passed away unexpectedly at his home on Tuesday, June 14, 2022.

Darrell W. Sinclair was born on July 8, 1926 to Lester and Alma Sinclair in Brookings, S. Dak., the second of four children. He attended Mabel High School and graduated in 1944.  During high school, he worked at the Castle Theatre as the projectionist, Coop gas station, and the pharmacy for Norris Hanson.  A few months after graduation he was called by the draft.  He joined the Navy and became his unit’s secretary and never had to participate in live shooting.  He was sent to electrical school next.  He served on the USS Astoria, from which they took high-ranking folks to the states.  Next his Navy sent him to Guam to maintain generators.  He was next sent to Washington, D.C. for Interior Communications school.  While in Washington, D.C. he met his first wife.  His next deployment was to Long Beach, Calif., where he served on the USS Iowa.  He was one of the last electricians that stayed on board until the USS Iowa was put in mothballs.  Darrell served five years in the Navy and then 23 years later at age 46 he joined the Navy Reserve.  After the service, he went back to school for electronics.  He received offers from Bell Aircrafts and IBM.  He took the job with Bell Aircrafts in Roswell, N. Mex.  He was responsible for a missile silo during the Cuban Missile Crisis.  After that, he went to Topeka, Kans., doing the same thing.  He was then hired by American Aerospace manufacturer, North American Aviation and spent one-year conducting tests before heading back to test equipment at White Sands Missile Range.  He led a crew that tested the equipment used on the Apollo space shuttle.  His last job was with Los Alamos National Laboratories for Engineering until he retired.

At age 47 he learned to play golf, went to school to learn the rules, and became a rules official for New Mexico’s Sun Country.  He was an official when Tiger Woods won his first tournament as a college player.

After his first wife passed away he met and married his second wife. They were classmates at Mabel High School and met at the Mabel Alumni Banquet.  They were married on September 17, 2006.  During their time together they did some traveling, spending winters in his home in California and summers in Spring Grove.

A memorial service will be 2 p.m., Saturday, June 25, 2022, at the Scheie Lutheran Church, rural Mabel. Military honors will be by the Spring Grove and Mabel American Legions.  Visitation will be one hour prior to the service.  Burial will be at a later date in the Arlington National Cemetery.