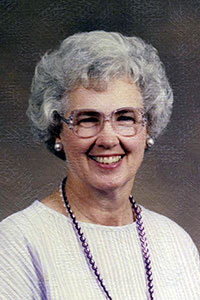 Visitation took place 1:30 p.m. Monday at Phelps Cemetery, one hour before the service.

Darlene Alice (Gregg) Larson was born March 14, 1931 in Lake City, Iowa, the daughter of Paul and Irma (Brown) Gregg. She attended country school through eighth grade in Lake Creek and Twin Lakes townships and then graduated from Rockwell City High School in Rockwell City, Iowa, with the class of 1949.  Following graduation, she was employed in the Calhoun County Treasurer’s Office.

Dar was united in marriage to Bernard H. Larson on October 29, 1950, at Woodlawn Church of Christ in Lake City, Iowa.  They met on a blind date and were married for 70 years.  They were blessed with two children, B. Kent and Brent G.

Darlene and Bernard lived on the Larson home farm for nineyears and then moved to a farm in southeast Minnesota in rural Mabel in 1968, their dream come true. Darlene was a church organist and pianist for 52 years. She taught herself how to read music.  She organized a teenage girls choir from the Newburg, Minn., United Methodist Church called “The Newburgettes.”  She was also Bernard’s helper in the fields and livestock program, which consisted of a cow/calf operation. When they decided to retire from farming, she worked as a home health aide and was also employed at Mac’s Café in Mabel, Minn.  In 2005, they left the farm and moved to Decorah, Iowa, then to Vennehjem in Decorah and then to Arlin Falk Assisted Living. She became a resident of Aase Haugen Home in June 2019.

She was preceded in death by her parents Paul and Irma Gregg, Her father- and mother-in-law, Herbert and Elizabeth Larson; her sister Marianne Anderson, her brother Leonard, her nephew Jeff Gregg, her nieces Doreen Counsell and Dawn Kelly, her sister-in-law Frances Latnz, and her brothers-in-law Earl Waters and Horace Lantz.

Darlene is survived by her husband Bernard, her sons B. Kent of Stewartville, Minn., and Brent (Joyce) of Rochester, Minn.; nine grandchildren, 30 great-grandchildren, two sisters, Pauline Walters of Lake City, Iowa and Doris (Lawrence) Fell of Isanti, Minn.; one sister-in-law, Shirley Gregg of Algona, Iowa; and her nieces and nephews.

Online condolences may be made at www.fjelstul.com.