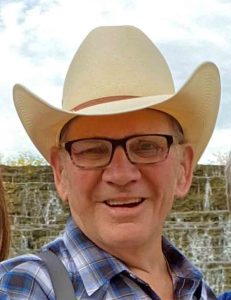 Danny Fay Broadwater, age 73, passed away peacefully on May 4, 2022, at Broadwater’s Red Acres. He loved his little slice of heaven on earth and was most content leaning on the fence watching his cattle graze.

Dan was born on December 14, 1948, to Clair and Marion (Dodge) Broadwater; he was the second baby born at the “old” Harmony Hospital. He attended Prairie Queen Country School and then Harmony Area Schools, graduating in 1966. He played the baritone in the high school band and continued playing later in life as part of the Harmony Community Band. He attended Austin Vocational Technical School for welding, which led to a lifelong love of fabricating and building useful things for his farm.

He was drafted on February 25, 1969, and served in the United States Army as a conscientious objector; he was an Army Medic at Camp Kaiser and Camp Young, South Korea. He was honorably discharged on February 18, 1971.

Dan married Kathleen Kaye Fishbaugher on July 8, 1972. Together they purchased an 80 acre farm and continued to work side by side for the next 50 years. He was looking forward to celebrating their 50th Anniversary this summer; they firmly believed that two hearts working together can accomplish more than one heart dreaming alone. In his own words, “I am thankful to have been able to raise our four children on the farm. We are proud of what we have accomplished on this farm.”

Dan worked for Pederson Brothers driving cement truck, building bridges, and welding, until 1973 when he went to work for his Uncle Paul at Broadwater Plumbing and Heating. In 1974, when he became sick of eating a sack lunch every day, they built a new dairy barn and silo on their farm. Dan and Kathy spent many years breeding their dairy herd to be red and white Holsteins so he would know whether it was his cattle out or the neighbor’s! Broadwater’s Red Acres received numerous Excellence Awards for top quality milk production over the years; they sold their dairy herd in 2004. He continued to raise heifers for a few years and helped his son with custom chopping. He enjoyed visiting with his Amish friends and driving the countryside to check the crops.

He volunteered his time with the American Legion Post 81, the Fillmore County American Dairy Association and served on both the Harmony and Fillmore Central school boards. He was proud to have had the opportunity to hand all of his children their high school diplomas. Whether you called him Dan, Danny, Dad, Grandpa, Uncle Dan, or Grandpa Dan, all were treated as his sons and daughters.

He was preceeded in death by his parents.