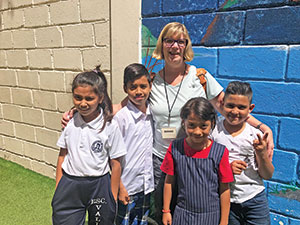 When Bonnie Davids traveled to the Nueva Esperanza, or New Hope school, in Tegucigalpa, Honduras, for a mission trip, the Preston native had no reason to expect that it would be any different from her previous visits. This was Davids’ seventh mission trip to the school, and she was looking forward to ministering to the students and their families again. She arrived in Honduras on Monday, March 9 with the rest of her prayer team, which included her sister Heidi Young, friend Sandy Stensland, and leaders Lester and Candy Johnson. The plan was to stay for one week and fly back home on March 16.
The week began like normal for Davids. She and the other members of the prayer team spent each day working with and praying for a different area of need in the school such as the parents, the staff, and of course, the students, who range from three years old through 12th grade. They even got to take the kids to a children’s museum, which is an unheard luxury for them. “These children are the poorest of the poor,” Davids explained. When she and the rest of the prayer team cooked and served a special dinner for the teachers as a way to honor them, many of the teachers ate very little so they could take their food home for their families. On Thursday, the group was able to do some sightseeing in Tegucigalpa at the El Picacho national park and government buildings. At that time, nothing seemed out of the ordinary. On Sunday, however, things began to change. During mission trips to the school, normally Davids would attend an English speaking church on Sunday morning with her group, but by then, the Honduran president, Juan Orlando Hernandez had imposed restrictions on going out in public.
Davids and her group were scheduled to fly out of Tegucigalpa on Monday morning, but around 9 p.m. on Sunday evening, President Hernandez announced that all borders were closing until further notice and no one could enter or leave the country by land, air, or sea. “It was like, boom, we’re not going home tomorrow,” Davids said. Instead, the next few days were spent contacting the U.S. Embassy and Minnesota Representative Jim Hagedorn. “He was instrumental with helping us connect with the right people at the U.S. Embassy at Tegucigalpa, Honduras,” Davids said. “We were very diligent every day looking on the websites to see any new notices that came out about U.S. citizens in Honduras.” They received the latest alerts and messages that helped them stay on top of information as it became available.
Since they weren’t able to go home as planned, Davids and the rest of the prayer team spent time helping to package food for the families of Nueva Esperanza students. The missionaries stationed at Nueva Esperanza, Carlos and Barbara Barahona, purchased 100-pound bags of food such as rice, beans, and sugar which were then repackaged into five- to six-pound plastic bags. The Barahonas would then take the bags to the school and call the families in one by one to distribute them. “I believe that we were there for a reason, and that extra week was so we could help pack food,” Davids said. Many Hondurans do not have refrigeration available to them and so they go to the market each day for their food. But when the strict stay at home order was put into place on March 18, they were only allowed to leave their homes once a week. “The people were really cut off,” explained Davids, adding that the Honduran people were very grateful for the food packages. 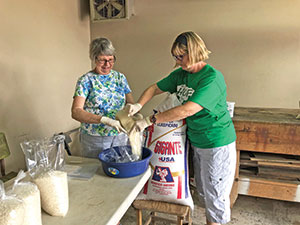 During that week, the Barahonas reached out to someone they knew from the English speaking church. He helped connect them to another member of the church who just happened to work at the U.S. Embassy in Honduras. “That’s a God thing!” Davids said. “The grace of God is how we came home.”
That Saturday, nearly a week after their original departure date, the team received a call from the U.S. Embassy informing them that they would be flying out on Sunday at 11:15 and needed to report to the Embassy by 3:45 a.m. The Barahonas also received an email with the permission needed to allow them to drive Davids and the others into Tegucigalpa, because no one was allowed on the streets anymore. The drive to the Embassy was surreal. “There were armed guards everywhere,” Davids said. When they arrived, their temperatures were taken, they were given masks and gloves to wear, and then they were packed on a bus with 30 other Americans who were also trying to get home. A second bus followed with more Americans, but when it broke down, everyone along with their luggage had to cram onto the first bus together. After a four-hour drive, they finally made it to the airport, which was deserted except for one open counter where they could check in. The plane was delayed and so another three hours were spent waiting at the airport. Thankfully, the Barahonas had packed some banana bread for the group to eat since there were no shops open for them to purchase food while they waited. When the plane finally arrived, it was an Immigration and Customs Enforcement, or ICE, plane that had just been used to fly deportees back to Honduras. “This was the first time in history that they had let U.S. citizens return on an ICE flight,” Davids explained.
The plane took off at 2:45 p.m. on Sunday and arrived in Alexandria, La., around 5:30 that evening. However, just because they were back in the United States did not mean their ordeal was over. The small airport there was overwhelmed with the nearly 100 people from the flight who all needed to change their next flights to get home. Davids, her sister, and her friend Heidi were able to schedule a flight to Atlanta and planned to fly back to Minnesota from there, but ran into more problems when four flights in a row were canceled on them. By Monday morning, they had had enough. They rented a pickup, wrapped their suitcases in garbage bags to protect them from the rain, and drove to the Fort Worth Airport in Dallas, Tex. Their flight to Minneapolis was scheduled to leave at 6:30 and they arrived with time to spare. “When we got there, there was not another soul and I was like, this is the strangest thing ever,” Davids said. When she had left the U.S. two weeks earlier, everything had been business as usual and to see things so changed in such a short amount of time was hard to comprehend. They flew to Minneapolis with about 30 other people on a 150-person airplane. By 11 that night, she was finally back in Preston. “I call my story ‘by the grace of God’ because never in history had this been done before where U.S. citizens had been allowed to arrive home on an ICE flight,” she said. She found out from friends that a picture of her on the ICE airplane had been reported on Fox News as it was a historic flight.
“I felt that God’s presence was with us, and that He would see us through,” Davids said about her time stranded in Honduras. “I had peace about the situation. During that time, the team developed a very close friendship and we were very supportive of one another.” Since she has arrived home, Davids has kept in touch with the other members of her group and with the missionaries at Nueva Esperanza. “I am talking to Carlos on a bi-weekly basis asking about the children. I’m very concerned about the children and their families having enough food to eat.”
Davids is thankful to Hagedorn and his assistant Julie Van Zandt for staying on top of the situation and in constant contact with her. “He (Hagedorn) was very kind and caring,” Davids said. She also credits prayer with her safe return home. “I would have to thank all the prayer warriors, all the prayers from my church family and friends, and my immediate family,” she said. “We knew that God would answer prayers.”
Davids is scheduled to return to Nueva Esperanza with her family in late July for a child sponsorship visit, but as airlines are canceling flights through the end of June, the trip is up in the air. “It’s in God’s hands,” Davids said. “We’ll pray for the best.” 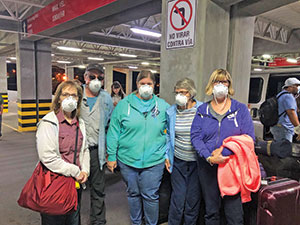