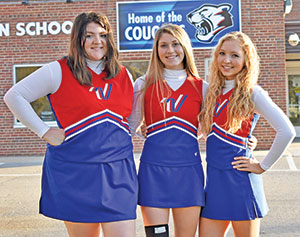 Three Mabel-Canton cheerleader captains received nominations and tried out for the 2020 All-American Team – seniors Jenny Reenalda and Katelyn Kleiboer along with sophomore Grace Solberg. Kleiboer was nominated for the sixth year and has earned All-American acclaim three times, including 2020. It was the second nomination for both Solberg and Reenalda.

Individuals that attend a National Cheerleaders Association (NCA) summer camp, if nominated by the NCA Staff, may try out for the All-American honor on the final day of camp. Candidates are evaluated in six categories: jumps, tumbling, stunting, motion, leadership and dance. All-American is an achievement based on a national standard and is not a competition among individuals.

“Every camp that I have attended, I set a goal,” said Kleiboer. “I tell myself to try my best to get noticed and become a nominee for the All-American Team. By doing this, I have achieved that goal every year, made the team three times and rewarded myself by traveling to these events. The hard work is worth it.“

Reenalda was nominated for her leadership and proficiency in stunting. “I can count on her to put in the extra work to get things done, even when I don’t have to ask,” said veteran coach Heather Kleiboer. “She tries very hard to master cheer skills.”

Solberg was also nominated in the areas of stunting and leadership. She became a Cougar captain this year as a sophomore. “Even when she may be injured, you would never know it, because she won’t tell you,” said Coach Kleiboer. “She gets right back after learning a skill or falling out of a stunt and working on getting it right, no matter how much it hurts.”

“I went to Orlando in 2019 (last year’s event),” said Solberg. “It was such an amazing experience for me! I loved dancing down Main Street USA and seeing all the little children’s faces light up as we danced past them. I also made two very amazing friends from Texas that I hung out with and got to share many great memories with.”

Katelyn Kleiboer, a six-year varsity letter winner and five-year captain, received her nomination this year in the dance category. Naturally talented as a dancer, she has choreographed parts of all the dances performed by the Mabel-Canton squad during the past six years. Kleiboer is versatile in stunting as both a base and a flyer.

All three 2020 Cougar nominees did try out, with Kleiboer scoring well enough to be All-American for the third time.

Nominees for All-American are also eligible to travel to one of the NCA Special Events. In addition to being nominated, Coach Kleiboer also requires the girl, if nominated, to actually try out for All-American. She wants each nominee to respect the opportunity that few receive, “step up to the challenge” and actually “earn it (the trip).” In addition to earning the opportunity, the girls pay their own way to NCA Special Events.

Depending on the size of the summer camp, the tryout might be in front of a very large crowd, such as in 2019 at Iowa State University, where Katelyn was rated one of the top three All-Americans at the camp.

All three 2020 Cougar nominees had planned to attend the November Special Event at Universal Studios in Orlando, Fla. It was expected to be the third such experience for Kleiboer and the second honor trip for both Reenalda and Solberg. However, due to COVID concerns this year, only Kleiboer made the trip.

“I have always loved NCA and the events put on,” said Kleiboer. “They have given me the opportunity to experience events in Florida that have created lifelong memories of meeting new people and cheering in front of large crowds.”

Cheerleaders are the only athletes whose purpose is to support other athletes on the field or on the court. After supporting other competitors during the school year, cheerleaders get their chance to compete as well as learn at summer camp. The Cougar squad holds fundraisers each year to finance the team’s camp experience.

“This is the only competition type of experience the M-C varsity squad gets,” said Coach Kleiboer, “and so we take it seriously. The girls work hard for this and are very proud of their accomplishments,” she added. “As a team, my girls have been awarded the Most Improved several times at camp and won a Gatorade cooler to bring home.”

The girls have donated coolers to the football team and one year, they put it up for auction at a Tackle Cancer game, where it brought in $500.

Similar to American Legion baseball, Junior Olympics Volleyball and AAU Basketball, there are opportunities for cheerleaders to work on their skills and compete during the off-season on teams that are not school-sponsored. Katelyn Kleiboer will be a member of the Glitter competitive squad this year.

Not every area school has students willing to put in the time and effort to be cheerleaders. After ballgames, there is no final score that reflects their effort and no cheerleading statistics in the newspaper. But that is just fine with cheerleaders, whose goal is to enhance the ballgame experience for everyone. Coach Kleiboer and her athletes dedicate many hours of effort to make ballgames something special for Cougar fans and other Mabel-Canton athletes.