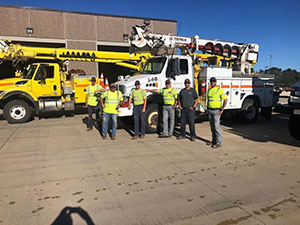 When the derecho storm hit central and east Iowa on August 10, MIEnergy got the call for help from the Iowa Association of Electric Cooperatives for emergency restoration of power. Over 58,000 people were without electricity; winds had knocked over grain bins and trees and taken out transmission and distribution lines and poles. MiEnergy called on volunteers from their linemen; by 5 a.m. the next day, Steve Bronner and Tony Rislove joined Jeff Henderson, Kyle Quam, Mark Dornink, and Noah Manning to head to Maquoketa Valley Electric Cooperative. Having both worked in emergency situations before, Bronner and Rislove knew they were facing long hours and high-paced work. Now back to work at their normal jobs, Bronner and Rislove shared some details of their post-derecho work.

Bronner, who had previously worked on the after effects of Hurricane Katrina said it wasn’t as bad as Katrina, but there were many similarities. He said he went into it knowing, “It’s going to be a mess!”

One of the first signs they were getting close to the devastation was when they noticed the long lines at gas stations. People had driven many miles to find gasoline for their generators.

Communications were hard once they got into the area. Power lines and cell phone towers were just gone; Google maps doesn’t work well in that situation. In order to find the cooperative, they had to stop and ask a local for directions.

Rislove related the story of a farmer who had 2x4s that had been driven by the wind and ended up impaling his house, knocking over his dresser. A shop in back of his house was simply now longer anywhere to be seen.

Bronner shared how the local linemen had reacted to the storm. They had been petrified as the 112 mile per hour sustained winds blew and blew for 45 minutes. The experienced linemen had been through other storms and tornadoes, but never a storm lasting so long with such severity.

Both Bronner and Rislove were impressed by the kindness of the residents. Rislove marveled, “Pop, water, ice cream, pizzas!” A grateful community was more than ready to support the hard-working linemen.

The crew was housed at a motel in Monticello, Iowa, a 45-mile drive from their work area. Only linemen could stay at the motel; other people were turned away. The motel even washed their clothes for them.

The workday typically started with a wake up at 5 a.m. They’d drive to the main shop for the cooperative to get their orders for the day from the foreman and then head out to work. Lunches and meals were delivered to them on the site; they would end their day at 10 or 11 p.m. and head back to the motel.

Everybody was working and pitching in to help. Rislove commented that it was “kind of a rush — you get in a groove.” When asked if the pandemic affected the situation at all, he answered, “Not really.” The men were working outside and usually more than six feet apart, doing their normal work.

When asked how much work they got done each day, Rislove responded that it varied — one day they might get only a half a dozen customers back on line, while another day they picked up 2,500 meters. “We got more on that day than Andy and Cole (fellow MiEnergy linemen) did!” Rislove chuckled.

Rislove who had worked through some ice storms out west and some tornadoes noted one of the differences was that you were close enough to come home if you needed to. MiEnergy had more volunteers ready to come and relieve workers if necessary.

Once they were finished at the Maquoketa Valley Cooperative, they were sent to Linn County to help there. Other linemen also headed to help in Iowa included: Tom Hart, Cole Kingsley, Clint Lickteig, Andy Prinsen, Ron Sitka, and Kraig Johnson. The team spent a total of 10 days working to get much appreciated power back on.

Brenda Tesch, director of public relations for MiEnergy, pointed out that this was a unique situation; the coop usually doesn’t have the opportunity to send a lot of people in response to most emergencies. The weather in our area during this time was calm with no storms in the forecast here.

Tesch said that in general the coops do a good job working together. Some people have a specialized skill set that is useful in emergency situations. “If we needed assistance, they’d be here for us,” she assured.

Families and spouses know that this is part of the linemen’s jobs. The linemen are always prepared to respond to the emergency call whatever the weather and location ready to cooperate as a team to help anyone.