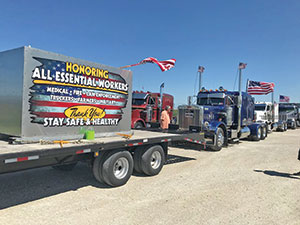 It was August 15, just after noon, and the weather could not have been finer,

And the trucks were thicker than bugs on a bumper, lined up around Sarah’s Diner.

With no bears in sight, they started to roll, half a mile outta Canty-town,

With plenty of time, they were doing fine, no need to put the hammer down!

By the time they rolled into Harmony, there were seventy-some rigs in all,

And spectators were waiting in every town, they were lined up wall-to-wall.

Well they rolled up Highway 52, with rigs of every size,

While families clapped and waved and cheered, with tears shining in their eyes.

The convoy rolled through Ostrander, Spring Valley, Wykoff and Eyota,

Heck, they toured lots of

beautiful towns, all through southeast Minnesota!

Readers who were alive back in the 1970s might recognize the above reference to the hit song “Convoy,” made famous by CW McCall.  And while it’s true that a convoy rolled through this area on August 15, this year’s event bore little resemblance to the law-breaking convoy depicted in the original song lyrics.

Prior to the convoy, when asked how the idea came about, Bill Funk, of Funk Trucking, explained, “It started with, we have a few antique trucks, we were going to go around to the care centers and assisted livings and park there.  Then we got a lot more people involved, so I decided to do an essential worker convoy, and drive by all the care centers and assisted livings because we’ve got too many trucks to stop there.”  Bill added that the planning for the event came together quickly, having started just about a month ago.  When asked where the truck drivers are coming from, Bill stated, “There’s a few guys coming from Baraboo, Wis.  Otherwise, it’s all people from around here.”

Bill, along with Tom Davis, of Davis Construction, and Kurt Smith, of Timm’s Auto, have been the organizers for the event, but Bill pointed out that there have been many others that deserve thanks for their part in making the convoy happen.  Bill said the families and staff at many local trucking companies, including his own, have been crucial in helping to get the convoy rolling.

Immediately before the trucks started their tour through southeast Minnesota, some final instructions were given to drivers, and a large jar was carried through the crowd, for anyone who cared to donate money that would be given to needy persons unable to pay for their prescription medications.  The truckers were very quick to stuff cash into the jar.  One observer noted, “There are a lot of $100 bills in there!”  And indeed, there were.  A very generous $3,000 was raised at this event.  Bill said he appreciated every donation, stating the money will be used “for the elderly that can’t afford their prescriptions.  There’s a lot of that that goes on.  They cut (their pills) in half or they only take them every other day.”

Starting at 12:30 p.m., the convoy rolled through Canton, Harmony, Preston, Ostrander, Grand Meadow, Spring Valley, Wykoff, Fountain, Chatfield, Eyota, and ended at St. Charles.  Although 70 trucks obviously creates a slow-moving traffic jam, there were no reports of complaints, as everyone seemed to appreciate what was going on.  Immediately after the convoy ended in St. Charles, Bill treated all of the drivers to a meal.  It was apparent that the event was a huge success, and Bill concluded, “I think it’s something that we might do as a yearly event, for the care center part of it, at least.”