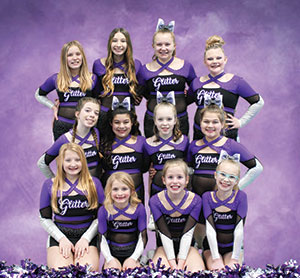 “I started Glitter Athletics to provide an opportunity for local kids, including my own, to compete in all-star cheerleading without having to drive to a big city and pay extensive fees,” says owner and coach Sunshine Norby. “The name Glitter Athletics was chosen because our motto is to spread kindness like glitter and leave a positive mark on the world wherever you go. We teach all of our athletes not only to work hard in their sport, but to also be an overall good person by instilling GLITTER in them, which is: Grace, Leadership, Integrity, Talent, Teamwork, Encouragement, and Respect.”

Competitive cheerleading consists of a fast-paced, 2½-minute routine that includes jumps, stunting, cheer motions, tumbling and dance. Practices are focused on these aspects.

“All I could do was a cart-wheel when I first was interested in Glitter Athletics,” says 11-year-old Taylor Sloan-Dahl, who just finished her fourth season with the program.  She had watched competitive cheerleading competitions online and was interested in dance and tumbling.

“My favorite part of the sport is meeting new friends from different areas in the community, and being a part of an organization that teaches not only tumbling, dance, and stunts, but also life lessons,” states Taylor.

Taylor’s mother Chelsea has seen many benefits from her daughter’s participation in Glitter Athletics and competitive cheerleading.  Not only is she able to do something she really enjoys but she has developed more confidence and has learned to push herself to be her very best. When her father Kyle Dahl passed, Taylor put all of her focus into learning and performing a solo routine in his memory.

“GLITTER has been an organization that Taylor has put her heart and passion into and her coaches have helped her so much throughout the years to achieve her goals,” says Chelsea Sloan. “Today we can’t picture what Taylor’s life would be like if Glitter Athletics was not here because it has had such a huge impact in her life and she loves it so much. I think if she could, she would live at the gym.”

“Our cheerleaders are taught to have clean, sharp motions, great showmanship, and excellent technique with everything they do. Once the cheerleaders have learned their entire routine, the season gets even more fun as they begin competing,” explains co-owner and coach Aubrey Norby.

The competitive cheerleading teams of Glitter Athletics start their season in August with competitions taking place from November through February.  If they receive a bid to Nationals, their season will be extended into March.  They typically average five to six competitions in the Midwest region.  They usually compete against other teams from Minnesota, Iowa, South Dakota, and Wisconsin but they have also competed against teams from all over the United States as well as international teams.

In the 2020-2021 competition season, Glitter Athletics had two competitive cheer teams.  Senior Silver consisted of members of their senior team while Glam Squad had members of their junior team.  The policies and restrictions implemented due to COVID-19 made their competition season different from past competition seasons, but that didn’t seem to affect the athletes.  At a competition in the Corn Palace in Mitchell, S. Dak., Glitter Athletics junior team got the highest score of the entire competition, earning them the title of Overall Grand Champion. The athletes’ hard work this season earned both Glam Squad and Senior Silver a paid bid to the National Competition in Wisconsin Dells, Wis., in March.  During the two-day competition each team performed twice.  Judging was based on skill level, technique and the consistency of their performances from both days.  Glam Squad and Senior Silver each earned a second place title.

“Our cheerleaders were thrilled to know that their hard work and determination was being noticed by the judges,” states coach Aubrey Norby.  “We are so proud of how far our small town program has come in the last few years and we appreciate all of the support, sponsorships, and donations that we receive from our fans!”

Glitter athletics has expanded its program beyond competitive cheerleading and now provides an exhibition cheer team that performs locally, monthly tumble classes, ninja boot camps, and several other fun events and classes throughout the year.

The youth sports program is located out of the Canton Town Hall in Canton, Minn. For more information on classes and events, please visit Glitter Athletics Facebook page or their website: www.gomotionapp.com/team/mnga/page/home.  They can also be contacted via email glitterathletics@yahoo.com or through Facebook messenger.