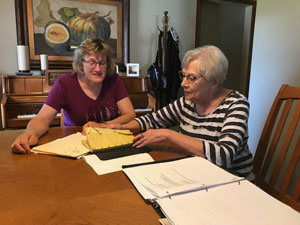 Nowadays, some people only associate “Community Chest” with yellow cards in the game “Monopoly.”  But in the real world, Community Chests have long provided a great deal of financial support to local charitable causes.  The Fillmore County Journal reached out to the townships within Fillmore County, and although most do not still have a functioning Community Chest, two local groups agreed to be interviewed about what they do.

Carol Rhodes is the secretary for the Harmony Community Chest.  She explained that, “We’re sort of a small town version of the United Way.  We solicit funds to help local and regional organizations and charities.”  Regarding the history of the group, she shared that, “It was started in October of 1951, so it’s been around a long time.  When it started out, all the solicitation was door to door, but as we’ve gone along, we’ve kind of streamlined it because you just can’t get people to do that door to door solicitation.  So we went to the method where we put together a solicitation letter and then it goes out with the utility bills.  And then a couple articles in the paper, and we put it on Channel 9, and a few posters, to get the word out there.”  Rhodes also shared a few names of prominent local citizens that were involved back when the Harmony Community Chest was initiated, stating, “Oh, there was Howard Johnson, most people would recognize his name.  Wally Piehn, he owned the telephone company, and Nelda Frogner, George Todd…”

Rhodes said one of the main principles of their Community Chest is to give locally and keep expenses low, adding, “Ninety-nine percent of what we take in is given to different organizations, and then we have some expenses.”  The Harmony Community Chest has board members that serve a three-year term.  Treasurer Kay Himlie, who has been involved with the Community Chest for 32 years, stated, “Maybe we could use a few more board members, if anyone’s interested.”

Rhodes, who has served on the Community Chest for over a decade, added that the time commitment for board members is very minimal, describing it as, “Five hours a year, if even that.  Just a couple of meetings.  So it’s not very time consuming.  Of course, Kay does a lot more, with the checks coming in.”

The Harmony Community Chest usually gives to roughly 15 organizations each year, with the largest check generally going to the Harmony Ambulance service.  Other recipients include the library, scouting organizations, Red Cross, Salvation Army, and a number of charitable organizations that provide services to the needy and/or persons with disabilities.  Rhodes and Himlie stated that they sometimes do some checking, via a website such as charities.org, to see if a potential recipient organization actually uses a high percentage of their funds to fulfill the actual mission of the organization, rather than using a lot of money for administrative costs.

Carimona Township also continues to have a functioning Community Chest.  It runs similarly to how the Harmony group operates, except that, as board member Linda O’Connor explained, “To my knowledge, we are the only Community Chest that goes door to door yet.”  She explained that the board members enjoy the chance to visit in person with friends and neighbors as they go out to solicit funds, and the fundraising results have been good through face-to-face interactions.

O’Connor also voiced her frustration with some questionable “charitable organizations” that call or mail to people these days, saying, “Sometimes it’s less than ten cents on the dollar” that actually go to helping the needy.  She said a local community chest assures that funds are going to appropriate and local needs.

O’Connor shared that donations to the Community Chest have stayed relatively stable over the years.  As with Harmony, the Carimona group usually gives to around 15 to 20 charitable organizations per year.  Some charitable groups are funded year after year, while others cycle on and off the list, depending on the available funds. She pointed out that the Carimona group has given to the school milk fund for many years, because board members feel strongly about that.

Having served on the Carimona Community Chest for over 20 years, O’Connor said she stays on the board because “You’re making a difference,… Give to your local Community Chest because the money stays in your community, for your neighbors.  We have very generous people.”  With a chuckle, she added that another benefit of serving on the Community Chest is, “We have a lot of good cooks.”  Meetings are generally rotated around to the homes of the board members, so a good meal is always part of the agenda.

O’Connor reported that the Community Chest tends to be a small group of long-serving board members.  She said new board members are always being sought, and the “workload” is small, since the board meets only twice per year.  “It’s not a big deal, but everybody’s so busy nowadays.”  She added that any potential new board members should not be intimidated, stating, “It’s very informal… we are open to new blood.”