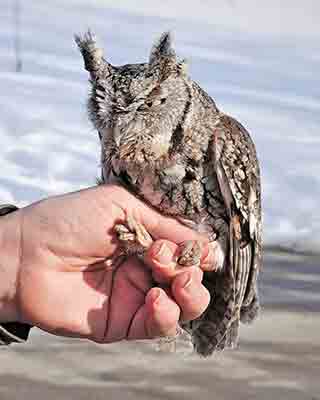 The morning of February 16, 2021, started off like any other for Andy Bunge of Preston, Minn., but how quickly things can change.  “It was early in the morning, about 6:30, and the sun really hadn’t come up yet, but there was snow on the ground and we have these large picture windows in the house… and I heard this thud on the window,” explains Bunge.

“I thought, what bird would be flying around this early,” says Bunge.  “I saw some feathers on the windowpane and so I looked down and here is this owl looking up at me,” he said.

After quickly putting boots on, Bunge ran outside and found it. “So, here is this Screech-Owl laying stomach down on five or six inches of light fluffy snow, with its wings spread out, but the head was turned around looking straight back up at me,” he explains.

“I picked it up with some gloves and brought it in the house right away and put it in a box.  I could tell it was kind of stunned, but it was alive.  I put a towel over it just so it would stay warm and kind of quiet down, by leaving it in the dark cardboard box,” he continues.

With a degree in Animal Science from the University of Minnesota, and some knowledge about animals, Bunge could tell when he picked it up, that above its left eye was an injury, and the eye didn’t open all the way.

Within a couple of minutes the volunteer from the owl center called Bunge back.  He learned it was an Eastern Screech Owl and the volunteer said, “I can tell its injured above its left eye,” which surprised Bunge that she was able to see that from the photo.

The volunteer then called the Raptor Center at the University of Minnesota on the St. Paul campus, as she thought the owl should go there for observation and possible x-rays.  The Raptor Center rehabilitates eagles, hawks, owls and falcons that are found injured or sick.

A little while later, someone from the Raptor Center called him and asked if there was any way he could get the owl up to the Raptor Center.  Bunge needed to get to work and wasn’t sure he could make that happen, but his wife Gail had an appointment in Rochester later that morning, so he inquired as to whether someone could meet her and take the owl from there.

Shortly thereafter Bunge received a call from a volunteer in Eagan, Minn., saying she would drive down to Rochester, meet his wife, and bring the owl to the Raptor Center in St. Paul.

“A day or two went by and then I got a call and they said that the owl was still alive and that it had an injury on its head, so they were going to keep it for observation and most likely they would be able to return it. They said it really needs to be returned back to where you found it because they have a territory they are familiar with,” Bunge notes.

Terry and Joyce Grier of Rochester picked up the rehabbed owl from the Raptor Center on February 27 and brought it back to Preston, where it had been discovered, to be released by Bunge.

The Griers are both longtime members of the Zumbro Valley Audubon Society, both serving on the Board of Directors and also volunteer often at Quarry Hill Nature Center in Rochester, helping with bird banding classes.

“We like to visit many places in Minnesota to see different birds, but have also been on 10 international trips with birding guides, seeing as many as 400 different species on one trip,” states Terry.

“This release is really kind of an exciting event for us.  Seeing a Screech-Owl returned to the wild is a real success story!  It makes us very happy to have played a part in the release of a rehabilitated bird like this owl,” Terry says.

When the Griers arrived at the Bunge home they were met by the Bunge family, including daughters Kristin and Alison, along with Alison’s husband and two children.  Everyone was very excited to watch the release of the owl back to its home territory.

After visiting for a few minutes and taking a few photos, the time had come for the release.

“I released it and it flew up into a tree right behind our house and sat there a few moments. Then it took off and flew further up in the tree,” describes Bunge.  And just like that, the experience was over, but will never be forgotten.

On a side note, as the Bunge family and the Griers talked with one another before the release, they learned that they had all met before.

“My wife and I brought Elderhostel, now Road Scholar, bicycling groups on five-day trips to the Root River Trail twice each summer for about 10 years, 2005-2015.  We would always stay at the Cottage House Inn in Lanesboro, which was started by Andy’s parents Waldo and Marilyn Bunge, and is still operated by members of the Bunge family,” states Terry.

“So we would see Andy and his two daughters Alison and Kristin helping out there.  We had not seen them for at least six years and probably more!  So it was a nice little reunion when we brought the owl for release,” explains Terry.

“It was really an interesting experience,” says Bunge.  And, after learning more about the Raptor Center, he decided to make a monetary donation for the incredible work they do.

“They take in about 1,000 raptors a year, so that’s two to three a day, so they really must have an active center there for observation and treatment of raptors – not only for taking care of them but for educational purposes for students to go and do field trips,” says Bunge, who has always been an animal lover.

Bunge also learned that owl populations were experiencing significant death loss last winter because of the very cold temperatures for a period of time. And, because of snow cover they were not finding mice, shrews, voles, etc. that are their normal diet, so many were starving to death.

“Owls are very important to farmers because of the huge number of rodents they consume each year.  It is important to remind people of how owls are the farmer’s friend, greatly reducing the rodent population at no cost.  Mice and rat poison weakens rodents, making them easy prey for raptors, who can accumulate the poisons until it kills them, thereby increasing the rodent population –  so owls are better than rodenticides,” explains Terry.

“Eastern Screech-Owls are the smallest owl we have in this area year-round, and they weigh about as much as a hamburger. (Northern Saw-whet Owls show up in the winter, and they are smaller and WITHOUT ear tufts),” states Karla Bloem, director at the International Owl Center.

“They are small enough they can be caught and killed by cats. Another threat they face is right now, when people are trimming dead branches and cutting down dead and dying trees. They are nesting right now and every spring people unknowingly destroy their nest trees and we wind up with dead or orphaned babies,” says Bloem.

“If people need to do tree work it is best to wait until late summer/early fall when nothing is nesting in them, to do trimming and removal if needed. If dead/dying trees aren’t going to hurt anything when they fall over, it is really important to leave them standing so they can provide homes for Eastern Screech-Owls and other cavity nesters,” Bloem explains.

There are ways anyone can help protect the owls as explained on the owl center website.  One way is to put up nesting boxes for them.  You can find a link to a design for them (and other owls) by visiting www.internationalowlcenter.org/nestbox.html.  The website also explains what to do if you come upon an injured owl.

“It was a good feeling – I think in general people can derive a sense of goodness in their hearts when they can do something like that in conjunction and be part of a team effort,” states Bunge.

“It bounced off my window, I rescued it, I reached out for advice, the Raptor Center helped with volunteers, my wife helped getting it to Rochester, volunteers who are interested in birds brought it back to Preston to release it and the Raptor Center did its job as far as caring for it – there is something to be said about that,” he adds.