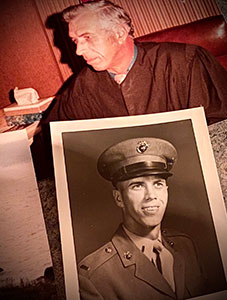 Funeral Mass for Clement will be held on Wednesday, January 13, 2021, at St. Mary’s Catholic Church in Chatfield, Minn.  A Rosary will be held at 9 a.m.  Public visitation will be from 9:30-11 a.m., with the Funeral Mass beginning at 11 a.m. Burial will take place at Calvary Cemetery in Canton, Minn.

Clement was born on January 22, 1930, in La Crosse, Wis., to Clement and Lucille (Stork) Snyder.  Clement attended and graduated from Canton-Milwaukee High School.  He then attended college at Notre Dame in Indiana, where he earned his Bachelor’s Degree in Law.  After law school, Clement joined the United States Marine Corps.  Clement returned to the Fillmore County area after the Marines where he purchased a law firm in Preston, Snyder Law Office.  Clement was appointed as a District Judge by Governor Wendell Anderson in 1977, and was re-elected multiple times until 1997 when he retired, serving for 20 years, as well as filling in when needed for several years following his retirement.

Clement took pride in raising his horses, horse riding, and was a part of the Saddle Club.  He liked to spend time camping at Forestville, where he, with his family, would enjoy trail riding.  He attended multiple rides in Northern Minnesota, Black Hills, South Dakota, and Missouri.  Clement assisted with building of the horse arena in Chatfield.  He had 450 acres for his beef cattle, along with 70,000 chickens, from which he supplied eggs to Channel 1.  He also enjoyed branding cattle.

Clement had a strong faith in God.  He enjoyed singing, going to church, and attending Catholic and Lutheran churches in his life.  He also made an effort to support Catholic Charities.  Clement loved his grandchildren and enjoyed spending time with them.

He was preceded in death by his parents, his brother Ramon, and sisters Wilma and Nancy.