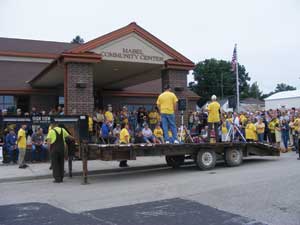 The informational meeting held by the Minnesota Pollution Control Agency (MPCA) regarding the proposed Catalpa LLC hog facility drew a large crowd to the Mabel Community Center Tuesday evening, June 19. More than an hour before the meeting was to begin, speakers demanding an Environmental Impact Statement (EIS), a substantially more in-depth review, spoke to the crowd in front of the community center. The nearly three-hour long informational meeting began with a review of the permitting process.

Yellow shirts emblazoned with “EIS YES” and stickers with the same demand were displayed by many in the estimated 300 plus crowd. Both outside and inside the center during the meeting, people were generally courteous and respectful in their comments. Law enforcement was visible.

The project proposal is for the construction of a new 1,992 animal unit (one sow and piglets is .4 animal unit) swine facility (4,980 sows) in Sections 7 and 18, Newburg Township, about 10 miles east of Harmony. Two barns, an animal mortality composting building, one stormwater basin, and a livestock watering well are to be part of the farrowing facility. More than seven million gallons of manure will be stored in concrete pits underneath the barns. Manure is to be removed each fall and injected into cropland.

The comment period on the Environmental Assessment Worksheet (EAW) has been extended to July 3 at 4:30 p.m. Cathy Rotshus, MPCA information officer, noted the capacity crowd was a record for a public meeting, which was being held at the request of local citizens.

Rotshus made it clear that this is not a public hearing, comments will not be part of the record or be considered in the decision making process unless the comments are submitted in writing. She said the public’s comments are important to us.

The EAW is a look into the potential impact to human and environmental health. It is used to decide if a more in-depth EIS is necessary. The general animal feedlot National Pollutant Discharge Elimination System (NPDES) Permit sets up certain conditions. These conditions can not be changed at this point.

Charles Peterson, responsible for EAW review, explained the review process is normally 30 days, but due to citizen requests it has been extended for a total of 53 days. Written comments from citizens during the review process are part of the official record and are public information. Three hundred comment letters have already been received on this project. After the comment period, the MPCA reviews the comments, responds in writing to each comment, and then considers the need for an EIS. Considerations include the type of facility, the extent and reversibility of environmental effects, and potential cumulative effects. No permits are issued until the environmental review is complete. The applicant may be asked for additional information at the end of the comment period.

There are three ways for the public to participate: informational meeting, request contested case hearing, and written comments. The EAW process must be complete before issuing a feedlot permit. MPCA continues to provide oversight during construction and does on site inspections. If conditions are not met, the MPCA has enforcement authority.

Over 30 people made their way to the microphone to express their concerns or to ask questions. Citizens making comments were of all ages ranging from 15 to senior citizens. All comments were limited to three minutes. There was a question about requesting a public hearing before the Citizens Advisory Board. Rotshus said that board no longer exists, the legislature disbanded it.

Note from this reporter; I will refer to people that made comments by their first name only, in most cases, and I apologize for misspellings.

Asher, 15, said he would like to continue to breath clean air and drink clean water.

Mrs. Louis questioned whether there is an aquifer under the proposed site? She was concerned about the volume of water use. Nitrate levels already are high in the area, water already polluted.

Ginger wanted to know what sinkholes are not listed. Who pays when my well is contaminated and needs to be dug deeper?

Steve asked who here is in favor of the facility? Clearly, the crowd was overwhelmingly in favor of an EIS and not in favor of construction of what was referred to as a “factory farm.” He suggested that the concentration of hogs and the manure produced would lead to an ammonia cloud, increasing lung diseases. “Does corporate America have the right to pollute rural America?” Scale matters, we shouldn’t be a dumping ground for Chinese pork.

Sabena maintained an EIS is reasonable.

Bonnie, Section 24, Canton Township, insisted there were mistakes in the EAW. This large of facility is too concentrated for the karst region. She repeated a statement she had heard, “the solution to pollution is dilution.”

Janene said she had photographs of the 2009 flood that shows water flowing through a field where manure from this facility is to be spread, which ran on through her property to Wiesel Creek.

Brigetta, a science teacher at North Winneshiek School, said her concern is child health. She maintained there are peer review studies that link hog confinements to higher child asthma rates.

Eva, Wykoff, expressed her concern about antibiotic residues left in the soil.

Kevin said he was concerned about how water quality from a shallow well would be affected.

Matt spoke in favor of the hog facility. He said we have built two hog confinement facilities and haven’t had many complaints. Speaking of manure application, manure is injected. The last thing we want is leeching.

Mark Gernes, MPCA permit writer, explained that in certain situations manure is required to be injected. This application calls for injection or immediate incorporation.

Vance, Section 24, Canton Township, runs a commercial dairy farm. He said he is pro-ag, but is concerned about ground water with this facility. With the karst features, sinkholes can form quickly.

Gernes replied that we do require identification of these features: sinkholes, intermittent streams. There are setback requirements.

Dane, apple orchard in Preston, said he had nothing against conventional farming, adding his main concern is the karst geology. Requiring an EIS is reasonable.

Karl recalled the spill of a million gallons of manure in 2013 from a manure pit that failed in Fillmore County. It was about one-quarter of the size of the proposed pits.

Steve Schmidt, MPCA feedlot compliance enforcement, said that pit was not permitted by the MPCA, but by county feedlot officer. He acknowledged that the manure spilled likely made its way to the Root River; it was a catastrophe. It was an open top pit; the manure pits in this project are under the barns and supported from inside. A tile line around them will be required to be checked monthly for any manure. Later there was a question about any penalty for the spill. Schmidt said there was no penalty because the failure was due to “an act of God,” a rainfall event that exceeded a 25-year storm event.

Dayna said we raise hogs on pasture and woods. Her greatest worry was the potential for a sinkhole to open up under the manure pits. It is clear this facility will have an environmental impact; an EIS is reasonable. Who pays for a ruined well and what about the effect on property values.

Dawn, Spring Grove, insisted we owe it to our children and our grandchildren to get an EIS.

Loni, two miles from proposed project, asked who is Catalpa LLC? Who is responsible for compliance?

Dan Dykstra, assistant general manager of Waukon Feed Ranch, Inc., stepped forward to answer those questions. Waukon Feed Ranch provides agricultural products and services which include swine management. Catalpa LLC is majority owned by Al Hein’s family. The site of the facility is below his home. Minority share holders include the Feed Ranch which is being hired by Catalpa as a general contractor and to manage the facility. Holden Farms provides the sows and contracts Waukon Feed Ranch and/or Catalpa to raise their pigs. The baby pigs are to be weaned at 22 days and shipped into the Holden Farms system. They are not to be finished near the sow facility in order to maintain biosecurity.

There was a statement from a woman claiming there is no formal way to submit complaints. Rotshus maintained complaints can be submitted anonymously to MPCA. Call (800) 422-0798.  When complaints are received we will go out and investigate.

Pam, a pastor, insisted an EIS for a factory farm is needed to protect family owned businesses, tourism, and fishing.

Charles asked how manure is transported and if manure produced by baby pigs is taken into account?

Jeff Bauman, project consultant, explained manure will primarily be transported through hoses using pumps. The use of manure tankers for transport was not ruled out. It is possible to move manure six to seven miles through hoses with pumps. Sows are expected to produce 2.5 litters of baby pigs per year, expecting to wean an average of 12 pigs per litter.

Sue, Section 21, Newburg Township, lives on a small farm. She sighted the hilly topography and the fragile, fractured bedrock. It makes no sense to have this concentration of pigs. Injected manure will still filter into the ground water. She suggested this facility will keep people from coming into the area, which could increase tax base and strengthen communities. An EIS is needed.

Jennifer, Fillmore County, insisted that a lot of well water is already contaminated. She expressed even greater concern for the growth of antibiotic resistant infections.

Calvin, a professor emeritus at the U of Minnesota, karst geology expert, said he keeps a data base on sinkholes. He asked people to send him maps that show where sinkholes and springs are on their property. An EIS is needed to provide more data. Sinkholes form naturally or can be induced by human activity.

Mark, Niagara Cave, said he had multiple concerns. Even when manure is knifed in it doesn’t stay where it was put. Within hours after a rainfall manure can be smelled in the cave well below the surface. An EIS is definitely necessary.

Harvey, Harmony, said we are all in this together.

Oliver, near Canton, as humans we try to advance. Put down your greed, understand other people are here.

Jenny felt the information on manure transport was not clear in the EAW.

Martin, environmental educator from a sixth generation farm in Olmsted County, belongs to a caving club. He has seen manure in caves. He said with karst expect the unexpected. We stand up as farmers as socially and environmentally responsible.

Robert, Harmony, graduated from Mabel high school in 1947. My problem is with the size of the operation.

Mark, farm north of Mabel which is 1.25 miles from the proposed site of the facility, asked how old is the data, noting weather patterns have changed since 2000. In good conscience how can the MPCA not order an EIS?

Gernes, MPCA, said the data age depends on information; the U of Minnesota makes management change recommendations. The permit is a five-year permit and is reviewed every five years.

Peterson, MPCA, said they use the most recent five years of meteorological data (2011-2016) and data which has been gathered closest to the site.

Rotshus reminded people that tonight is not your only opportunity to ask questions. Several that commented at this event were encouraged to submit their comments in writing. Written comments will be accepted either by email at mark.p.gernes@state.mn.us or mailed to Mark Gernes at MPCA, 18 Wood Lake Dr. SE, Rochester, Minn. 55904. For more information on the permit, call Gernes at (507) 206-2643.

The feedlot will require federal, state, and county permits.