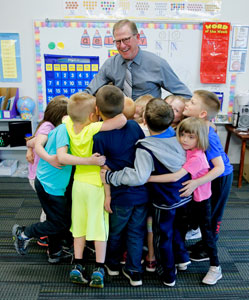 In the past few years it seems like many teachers in the Rushford-Peterson school district have retired, and now it is time for Superintendent Charles (Chuck) Ehler to retire as well. He has been at R-P for 12 years and has made a great impact on the school and community.

Though his career will end in Rushford, it began in Mabel, Minn., when he graduated from Mabel-Canton High School in 1969. After graduation, Ehler went to Winona State University (WSU) to get his bachelor’s degree in history and instructional media. He graduated from WSU in 1974 and was hired as the media director in the South Winneshiek school district in 1976. He worked in South Winneshiek for 31 years in a variety of positions. In addition to being the media director, he was also the boys basketball coach, boys golf coach, acting high school principal, and elementary and middle school principal. During this time, he went back to school at the University of Northern Iowa for his master’s degree in education and principal K-12 endorsement. In 1992 he got his sixth year certification from WSU.

Ehler moved to Rushford in July 2007. He had been hired as the superintendent of the Rushford-Peterson school district despite having no prior experience in such a position. One would think that would be difficult enough, but Mother Nature disagreed; she added to the challenge with the flood of August 2007. Ehler was faced with the task of preparing everything for school in September. He did not back down from the job. He was able to start up school in a timely manner, thereby achieving something important: trust within his new community.

Securing the funding for both Rushford’s and Moose Lake’s new schools was another tremendous achievement for Ehler. It took a lot of hard work, community support, and a little of what he called “divine intervention,” but the end result was worth it. The community has a beautiful new school, and with the new school has come an influx of new kids. Ehler stated that he will miss the constant contact with the kids, especially their hugs and high fives. Though the position of superintendent comes with perks such as those, it is a very busy job. He mentioned that he has not able to do everything he and his family have wanted because of all the demands of his job. “It’s time for me to give back to my family,” he said. This response is not a surprise to many people who know him. Many students and staff have seen him helping the custodians wipe off tables after lunch or picking up trash on the floor. Samantha Cunningham, the art teacher at R-P, said of him: “He has a heart of gold. A servant’s heart.”

Ehler has no specific plans after his retirement, only calling it “a different phase of life.” He will not have to constantly manage his time as he does while working, so he will be able to relax and enjoy things as they come. Ehler is very grateful for the support he has had here throughout the years from the school board, committees, staff, and many more. He feels truly blessed to have been given the opportunities he has had. These last 12 years have been full of many challenges and rewards, and he will be greatly missed at Rushford-Peterson Schools.