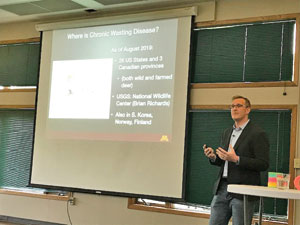 The Eagle Bluff Learning Center in rural Lanesboro hosted an educational talk September 8, on the topic of Chronic Wasting Disease (CWD).  The speaker, Peter A. Larsen, PhD, works at the University of Minnesota’s Department of Veterinary and Biomedical Sciences, College of Veterinary Medicine.  Currently, he leads a CWD diagnostic development team.  Having grown up in South Dakota, Dr. Larsen knows how prevalent and important deer are in the Midwest.  “We have been connected with deer for centuries upon centuries upon centuries,” he stated, “And we can’t lose sight of that when thinking about CWD.”

Dr. Larsen explained that CWD is a progressive and fatal neurodegenerative disease of cervids (deer, mule deer, moose, caribou, and elk).  He stressed that it is not caused by a virus or bacteria, but instead is due to “misfolded prion protein.”  Prion proteins are found in all mammals, and they help with normal cellular function.  As a visual aid, Dr. Larsen used a plastic “Slinky” toy to show how a normal prion is shaped.  He then explained that CWD results when prions adopt a misfolded shape, which he demonstrated by twisting the Slinky back upon itself.  He also pointed out that CWD is not “zombie deer disease,” meaning the woods will not be filled with aggressive monster deer.

When a deer ingests CWD misfolded prions, they cause other normal prions within the deer’s body to misfold, and the process snowballs.  The deer’s natural defense against this is to bring the CWD prions together in the lymph glands, where the body attempts to neutralize them.  But the prions are incredibly tough, and gradually spread to the spinal cord and brain, eventually killing the animal.  Deer in the late stages of CWD are very thin, and may exhibit increased thirst and urination.

The entire process may take around two years, which means that a deer that has recently been infected with CWD may not have enough CWD prions to be detected with current technology.  This is why lymph glands are the preferred body part of testing, since that is the first place that CWD prions show up in greater density.

CWD was first discovered in Colorado in the 1960s.  Since then, it has spread into 26 U.S. states (especially in the Rocky Mountains and the Midwest) and southern Canada.  There have also been confirmed cases in Norway, Finland and South Korea.  Some of this long-distance transmission has been attributed to elk farms or deer farms that have shipped in animals from the USA.

There is no evidence that humans can be infected with CWD, but Dr. Larsen said CWD has been shown capable of infecting pigs and certain types of monkeys. He also said because the prions can be misfolded in many different ways, it’s possible that certain misfoldings may be more capable of infecting other species, and there simply hasn’t yet been enough testing and research to give a “green light” to humans eating meat from CWD-positive animals.  Dr. Larsen added, “There’s growing concern of human transmission… We don’t want CWD-positive meat entering our food supply, because (then) you’re testing the hypothesis in real life… I don’t like the fearmongering… but I think that, to be smart about this, we can’t have people eating CWD-positive meat.”  This is why the CDC (Centers for Disease Control) recommends that people avoid eating CWD-positive meat.  He also pointed out that when an animal is tested for CWD, there is no such thing as a “negative” result.  An animal is either classified as positive for CWD, or CWD is simply “not detected” in that sample.  He said researchers continue to work on developing better testing, so that CWD can be detected earlier in the cycle.

Because the prions are so resilient, stopping the spread of CWD is exceptionally hard.  Dr. Larsen said that recent research has found that the prions can even seep into the soil (from feces or animal carcasses) and then be taken up into a growing plant, through its roots, and eventually expressed in the leaves of that plant, where it will be ingested by grazing animals.  When discussing how to combat CWD, Dr. Larsen said the geography of the issue makes an ecological approach unrealistic, adding, “But what we can do is we can try to develop ways to prevent individual deer, I hope it’s a vaccine, from allowing that prion to expand.”

Dr. Larsen recommends, “If you see a sick deer, something that just doesn’t look right, just report it, just call the DNR.”  He also said some practices, such as putting out salt blocks or food in order to enjoy watching deer in the backyard, are no longer a good idea, since this brings many deer together in a small area, which only speeds up the transmission of CWD.

At the conclusion of Dr. Larsen’s talk, he fielded questions from the audience.  One attendee mentioned an upcoming talk entitled “CWD in Bluff Country,” which will be given by Bryan Richards, the Emerging Disease Coordinator at the US Geological Survey National Wildlife Health Center.  The talk is free and open to the public, at 7p.m. on September 19 at the Rushford-Peterson auditorium.  It is sponsored by the Farm Bureau offices of Houston, Winona, and Fillmore Counties.