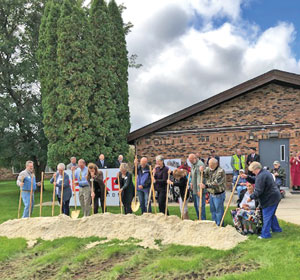 After two years of market analysis and planning by the board of directors, administration, and managerial staff, they were finally able to break ground on the new addition and for the remodeling of the 42 year old Chosen Valley Care Center (CVCC).  Before any shovels could be filled with dirt the care center had to make an application to the Minnesota Department of Health (MDH) for approval of the $10.2 million project.  Moratoriums exist that affect the nursing home industry so this type of project needed MDH approval to complete their plans.

Attending the ceremonial ground breaking were past and present board members, CVCC Foundation members, CVCC residents and family members. Russel Smith, mayor of Chatfield, Chatfield City Council members, Fillmore County Commissioner Mitch Lentz, along with representatives of Wold Architects and Benike Construction were also on hand for the ceremony.

The impetus for this project had three goals: to address needed upgrades to the facilities plant and infrastructure, to create a more efficient work environment for all staff, and most importantly to enhance the living experience of the residents.

The amount of single and private rooms will be increased substantially as more residents are wanting their own living spaces.  When complete, the skilled nursing facility will have 44 private rooms with private bathrooms, 24 single rooms with shared bathrooms, and five split-double rooms.  Split-doubles have two residents who share a room and a bathroom.  This compares to the current configuration of four private rooms, 12 single rooms, six split-doubles and 20 double rooms. To accommodate this change in room configuration, a new wing will be built during Phase One connecting the current D wing to the E200 area, forming a triangle- shaped footprint.  The new wing will have 31 private rooms with private bathrooms. A major goal for the project has been to eliminate the dense use of four residents sharing a bathroom.  When completed, the facility will have no more than two residents sharing any bathroom.  Currently there are 78 beds and that will be the same after construction.

Also during Phase One a new activity room will be added as part of the new wing.  The 1,500-square-foot gathering room is designed to accommodate a group of 100 and will be used to enhance programming and activities for the entire campus. It will allow for social events, musical groups and have more audio-visual capabilities. All residents in skilled nursing, assisted living and the independent living space will be able to utilize this area. Currently the main dining room is often used for this purpose, creating many scheduling conflicts.

During Phase Two the current A wing will be remodeled entirely to support 10 new short-term Medicare rehabilitation suites.  These suites will offer private bedrooms along with private bathrooms and showers. These transitional residents will have their own lounge and dining area.  At the end of the A wing a new and much larger physical therapy space will be added. The new therapy space will be nearly three times larger than the current space and will offer a larger gymnasium and several private treatment rooms including one for speech therapy. It will also have a full kitchenette for physical therapy patients to practice daily living skills they may need prior to returning home.

Also in Phase Two the current rooms on the D and E wings will be remodeled heavily to provide wider bathroom doors, updated cabinetry, new lighting and new decorative treatments for wall, floors and ceiling.  The HVAC system for the entire facility will be modified adding individual room controls, allowing residents to maintain the temperature in their room at their comfort setting.

Nurse servers will be added to all rooms.  Nurse servers are used by staff to support the needs of the resident in that room including such things as linens, towels, care supplies and medication.  Stocking and maintaining materials in the nurse server will be done during quieter hours and less busy times. This change will eliminate the presence of large carts in central corridors further advancing long standing goals to make the facility more home-like.

With the advanced technology available, the nurse call system will be completely replaced with systems that integrate with pagers, cell phones and other newer technologies. Security will be improved by replacing and centrally locating door locking controls. This will provide additional security and monitoring to building entrances and exits.

Other items in the project during Phase Two include a designated, better equipped training room for staff that includes computers for web-based training and capabilities for in-services for staff and for CNA (Certified Nurse’s Assistant) training.  A new walk-in freezer and more dry goods storage will be added in the kitchen area.  Office spaces will be rearranged to better consolidate job functions and communications among staff and administration. Smaller family congregating spaces will be added and an additional hospice room will be available to support families of hospice residents. More parking will be available in the rear lot and a new larger back-up power generator will be added. Many new local storage spaces to support resident needs and equipment storage is also included in the remodel. The beauty/barbershop will be renovated and relocated.  New facilities to improve and manage the distribution of cable TV and over-the-air television services will enhance residents’ viewing options. Lastly, the outside of the building will get a new look with steel siding over the present brick exterior.

Craig Bakken, CVCC Administrator, talked about the intensive preparation for this day.  Input was taken from all parties: staff, residents and families of residents. Financial planning for a project of this scope was a major part. The nursing home industry is highly regulated and codes must be followed strictly so that involved a lot of time in the planning. The most challenging thing for him and the board of directors was to try to do everything on their list and stay within the budget. In the end some items were deleted but they believe they addressed the most important things that they started out to accomplish and the end result will be a win-win for staff, residents and families of the residents.

The project is expected to last two years and should be completed by October 2021. When asked what the down side of construction would be for residents and staff, Bakken said that residents may need to move to other rooms temporarily and that having construction on site would create some issues, but that will be dealt with as little disruption as possible. On the positive side, he thinks many residents will enjoy being able to watch the changes as construction proceeds.

Guiding the planning and development process are Wold Architects from Minneapolis and Benike Construction of Rochester.