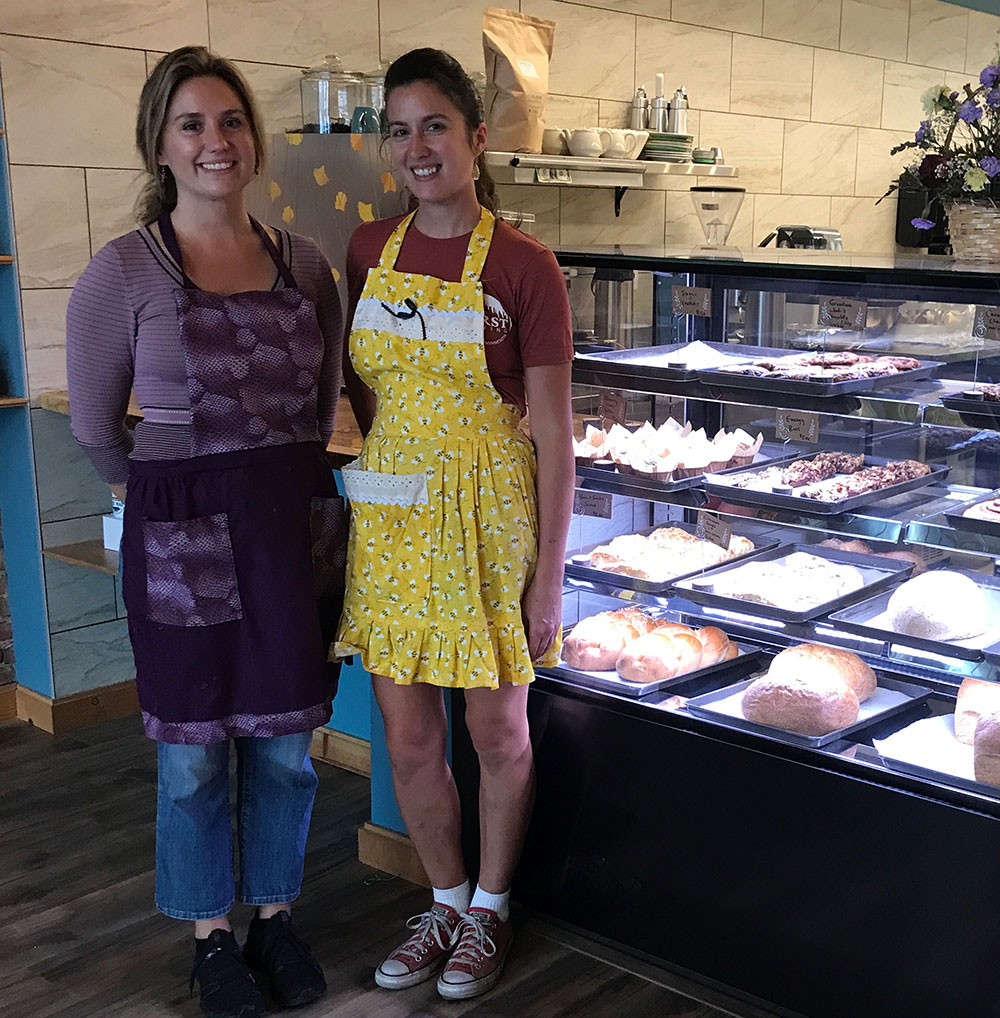 After being bakery-less since 2005, Chatfield residents are thrilled to welcome their new bakery, Carly Mae’s! Local residents and sisters Jerralyn Dieter and Jalyssa Houdek used their middle names to create the name of their new business.

Tantalizing items in the display case on a recent Thursday included ham and Swiss scones as well as cinnamon ginger scones, sourdough and yeast breads, braided Challah bread, cinnamon rolls, blueberry muffins, and assorted bars and cookies. A new drink cooler was filled with Izze sparkling water, synergy drinks, and kombucha. The sourdough bread, called Fillmore County sourdough by Jerralyn, is made with her starter that is six and a half years old.

Coffee is available to enjoy with your bakery selection at their seating area. An espresso machine is in the plans for the future.

A steady stream of customers came through the door Thursday, emptying the display case nearly as quickly as the Jerralyn and Jalyssa filled them. One customer commented, “We’re so excited to see the open sign! You guys teased us — open — not open — open, but it was a good tease!”

The bakery had had a soft open during Western Days, and then closed to finish up some details before opening last week. The menu top boards remain to be hung yet; these will display offerings and prices of the offerings.

Baking at the shop begins around 3:30 a.m. The customers are welcomed from 6 a.m. to 3 p.m. Mondays, and Wednesdays through Saturdays. On Sundays the shop will be open from 7-11:00 a.m. The bakery will be closed on Tuesdays.

Jerralyn shared that baking was a “calming thing” for her; she enjoys giving family and friends something good to eat. Jalyssa agreed, “I love the joy it brings to people, the smiles it puts on their faces — and it’s so good!”

Their favorite bakery item to make is the Challah bread made with local honey, eggs, and butter. Rolling the dough out and braiding it finally makes use of their play dough skills from childhood, according to Jerralyn. After braiding the loaves, assorted seeds such as poppy and sesame are added by the bakers to decorate the bread even further.

Both of the women had worked in the food industry previously and have long shared the dream of owning a bakery. Jerralyn noted that she had been working in the food industry since graduating from high school. Previous to opening their bakery, Jalyssa had worked at Four Daughters Vineyard &  Winery, while Jerralyn had been a stay-at-home mom for her two sons, Dodge and Asher, and has done a grower’s market.

Sara Sturgis, promoter at Chatfield Alliance, had asked Jerralyn if she was interested in starting a bakery and shared that the building at 209 Main Street was available. Owners Julie and Mike Sogla were enthusiastic about Carly Mae’s coming into their building. Julie helped in getting the kitchen layout and Mike helped with construction. Work on the bakery began last April.

The 1905 building was most recently used by a craft and gift shop; before that it served as a pharmacy. Original exposed brick walls made from Chatfield brick have been freshly cleaned and tuck-pointed by Jerralyn’s husband Mike and his friends. Mike and his uncle did all the needed woodwork at the front of the building. Pressed tin ceilings only needed a coat of paint to bring them back to their original beauty.

Jerralyn and Jalyssa credit their mom with teaching them the “bakery ropes.” Mom, who did a lot of from-scratch baking and decorated cakes, was famous for her kolaches.

Kelli Milbrath has helped with the branding of the bakery. She has added the Carly Mae logo to metal camping mugs available at the bakery as well as stickers for the bags, magnets for the drink cooler, and banners. Tote bags will also be offered soon.

Both Jerralyn and Jalyssa enjoy wearing aprons. They have several purchased from local businesses Just So and Big Girl Stickers and Stems. The aprons add a special touch to the atmosphere.

The duo stated their goals for the business are to be open and be an asset to the community. They want the people of Chatfield to enjoy Carly Mae’s.

They have been overwhelmed by the support of Chatfield. “They’ve welcomed us with open arms!” exclaimed Jerralyn.

A grand opening is yet to be planned. Jerralyn and Jalyssa have quickly discovered they need more help in the bakery. Once they get a few employees, they will be able to move forward with their plans. They have been in contact with Rochester’s ABC (Ability Building Center) to hire more staff.

At this point, advertising and promotions have been limited to word of mouth and social media. Right now, the duo feels their biggest challenge is that they feel there isn’t enough time in the day; they want everything they do to be quality.

A more extensive menu is planned for the future. The cafe intends to offer sandwiches made with freshly baked bread. Carly Mae’s plans to offer at least one gluten free item each day. They also plan to offer low sugar options and healthy energy bars.

Carly Mae’s is environmentally conscious; they compost egg shells, coffee grounds and filters as well as the compostable to-go cups. They encourage anyone interested in the compost to contact them, and they encourage others to compost as well.

Be sure to stop in to check out Jerralyn and Jalyssa’s new bakery, Carly Mae’s, in Chatfield and take home some yummy baked goods. You won’t be disappointed in their delicious offerings!