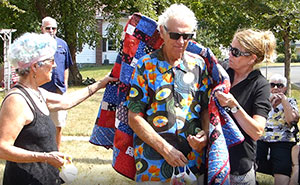 On August 8, 2020, Donald J. Scott of Chatfield received a special gift in honor of his service to our country. Scott, a Vietnam War veteran, received a Quilt of Valor sewn by Chris Rand and Rita Radil of Rochester. His wife, Rosanne Licciardi, and his niece, Julie Soat of Galena, Ill., wrapped the quilt around him on the day of its presentation.

As a Vietnam soldier, Scott was severely injured, having over 60% of his body burned when a tank he was in exploded. In addition to living with the effects of those injuries, he also suffers from post-traumatic stress disorder (PTSD) and is being cared for by the Minneapolis Veterans Administration.

Many in the area may best know Scott as a musician performing at various venues across southeastern Minnesota. His blues performances draw large crowds and his music not only provides joy to those who listen, but serves as a form of therapy for Scott himself.

He shared that he got his first guitar in 1965 when he graduated from high school. “I started playing a lot more after I got out of the Army,” Scott said. “I formed my first band, The Dust Bowl Blues Band.”

Scott has written about 20 songs over the last 25 to 30 years, including “Eight Days of Hell,” which recounts his time of terror in Vietnam.

Playing music full-time since being discharged from the Army, Scott knows that it is “no doubt” therapeutic for him. His time in the Army left him with physical and emotional scars.

Scott said he grew up in Chatfield, graduated from high school and began attending college in Mankato and later in Rochester. He was drafted into the Army in 1967. He completed his basic training at Fort Campbell, Ky., and went to Fort Sill in Oklahoma for artillery training. After getting a short leave to visit Chatfield, he was sent to Vietnam on January 1, 1968. He was stationed about 25 miles southwest of Saigon, where just a few months later, he suffered severe burns on May 9, 1968, just a day after his 21st birthday.

He recalls that night, explaining that he was sleeping in a bunker when the Viet Cong blew it up. Scott escaped the bunker and went into a tank, but the fire storm continued and the Viet Cong blew up the fuel tank. “I was the fourth one out,” Scott recalled. “The monsoons were going on, so there as a lot of water around. This was about 2 in the morning. I was able to put myself out by laying in the water.”

As Scott remembered that night, he said it was a huge loss for the United States. “The whole battery was blown up – all six units.”

Scott was flown to Saigon and then on to Japan where he spent eight days in the hospital. He was then transported to Denver where he spent another two months in a hospital. After being sent home on convalescent leave, Scott was actually reassigned to finish his service at Fort Knox, Ky.

“When they sent me back to active duty, I thought my father was going to have a heart attack,” Scott recalled. “We fought it.”

However, Scott was required to finish his service at Fort Knox, where he said it was “Unpleasant to say the least.” Not only was he still dealing with his injuries, he had a First Sergeant that he had to answer to. “It was not a  fun experience to have to deal with him,” he added.

When Scott was discharged on June 7, 1969, Scott said he quickly took to the streets, protesting the war as a Vietnam veteran.

Scott readily admits that while he supports our country’s soldiers, he does not support the politicians who take the nation to war over oil. “If you look at our military budget, it is 51% of our overall budget, which is way too much,” he said. “I don’t think we should be policing the world. I think these countries should be able to lead themselves through their own democratic policies.”

Scott continued to deal with his physical injuries – coping with the effects of the burn. He returned to college on the GI Bill and began playing his music. Just 18 years ago, in a discussion with a fellow Vietnam veteran, Scott came to realize that he may also be suffering from PTSD. “He just assumed I had it,” Scott said.

So, taking his friend’s advice, Scott went to a doctor and was diagnosed. “I fit every one of the nine criteria,” he said. “It helped my compensation and allowed me to be able to go to the VA for treatment. I didn’t even know I had it. But any kind of trauma can be a contributing factor.”

Because Scott left the service and became a veteran against the war, he has not joined any of the local military organizations. “I am a member of the Disabled American Veterans,” he said.

Licciardi, who has been married to Scott for six years, organized the Quilt of Valor as a surprise for Scott to honor him for his service. He said the day he received the quilt was an emotional one. In addition to the quilt ceremony, he and his family had hosted a memorial service for his brother. This, however, did allow many of his family members to be in attendance at the quilt dedication, which meant the world to Scott. “I felt very humbled,” he said.

While Scott and Licciardi are currently in North Carolina visiting family, Scott said his quilt is at home, safely covering his bed. “To me, it should almost be hung on the wall. To appreciate it even more,” he said.

After their stay in North Carolina, Scott said they are off to Texas and into Mexico, where he has been sharing his music for more than 15 years.

In addition to his music, Scott enjoys walking, swimming and biking in Minnesota. “I love the trail,” he added. “It’s just so very relaxing to get out and enjoy it.”

Enjoying his pastimes in nature and sharing his music have helped Scott deal with the horrors of war he experienced in Vietnam. Receiving the Quilt of Valor has also provided comfort and a sense of appreciation for the sacrifices he made as a soldier.