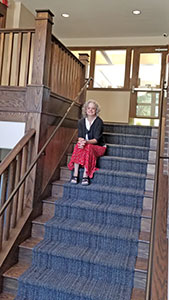 It all started on February 15, 1911 when Chatfield resident Medora Morrill proposed to the Commercial Club that a public library be opened in Chatfield at the public Rest Room. She was given the go-ahead to form a committee which collected 1,000 donated books, allowing the library to open to the public less than a month later on March 9, 1911. Just two years later, the Chatfield City Council created a Library Board which realized that the library was growing so quickly that a permanent, dedicated building was necessary. An Andrew Carnegie grant was applied for and received in the amount of $6,000 to construct the new library and Chatfield’s Carnegie library was officially opened on February 15, 1915.

In 1997-98, the library was renovated for the first time and a new entrance was built with an elevator to make the library ADA compliant. An addition doubled the size of the library and a large meeting room was created in the basement.

Now the Chatfield library has undergone renovations once again. Head librarian Monica Erickson remembers chatting with Claude Moore several years ago at the base of the stairs in the library entry. Moore had helped with the 1997-98 addition, creating woodwork to seamlessly connect the original part of the building to the new section. “He said something like, ‘You know… this staircase would look great with a wooden balustrade.’” Erickson explained. “That is when the seed of the idea was planted.” She had always felt kind of off about the entryway after the 1997-98 renovations, describing it as sterile. “It was the first thing you saw when you entered the library and it in no way reflected the Craftsman/Prairie School character of our original Carnegie library building,” she said.

Erickson presented the idea of renovating the library to fit with its original look to the library board who took it under consideration and began discussions on the matter. Historian Robert Vogel encouraged the board to meet with Christian Hendrie of IIW, P.C., an architect knowledgeable in preserving the historic integrity of old buildings while still meeting modern needs. “He was just the person we needed!” Erickson said.

As it had been 22 years since the last renovations, other things needed to be updated or redone in the library as well, such as painting, replacing carpet, etc. It was decided that if the entryway was to be improved, it would make sense to do the other projects at the same time. Funding for the project came from donations of all sizes that had been given to the library over the years.

The renovations started in the beginning of March, 2020 with Hendrie serving as the architect and project manager and Benike Construction as the general contractor. Originally, the plan had been to keep the library open for most of, if not all of the project, but on March 17, the library closed due to the pandemic. That turned out to actually be a good thing as it made the project easier for the work crew and for the library staff. Furniture had to be moved around several times to allow the work to continue and books were removed from shelves and stored in stacks for a time. “I can’t even imagine trying to manage being open and serving patrons under such conditions!” Erickson said. “So, if we had to have a pandemic, at least it came at a time that was beneficial to our renovation.” The pandemic did create some unique challenges though, such as longer shipping times for some items and delayed work due to quarantines.

When the library reopened on September 1, 2020, most of the project had been completed. The renovations included remodels of both bathrooms, new carpet upstairs and downstairs, freshly painted walls throughout the library, removal of the heater on the ground level, new exterior and entryway lighting, and a new front door along with a new handicap door opener and push plates. In the original part of the library, called the Reading Room, new period-style LED lights were installed and a bookshelf was rebuilt and placed in its original location in the room.

Erickson has been very happy with the renovations. “Bringing characteristics of Craftsman style into our entryway will let people know right away that they have just entered a building whose caretakers respect and value its historical integrity,” she said, explaining that the goal was to have the renovated entrance complement the original 1915 part of the library. “I have always loved imagining what the original library may have looked like back in 1915. Seeing some of what I have imagined become reality is exciting!” She is also pleased that taking the steps to restore the Carnegie library back to its historic identity also increased the library’s green footprint with the new LED lighting.

Patrons of the library have also been appreciating the changes. “’It’s beautiful!’ is a comment we often heard when we first opened the library up to the public after the COVID-19 shut-down,” Erickson said. “We still hear that very same comment from those who are just passing through or visiting for the first time. I personally think Andrew Carnegie would agree.”

You can learn more about the Chatfield Public Library including their hours at chatfieldpubliclibrary.org or by calling (507) 867-3480.