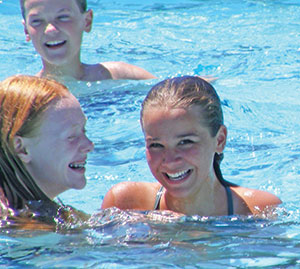 The Chatfield City Council, after considerable debate, voted to open the swimming pool to everyone, at their June 16 special meeting. The motion was approved by a 4-1 vote (Mike Urban voted no). The pool will be open to everyone, the “Open to Chatfield School District Only” sign will be removed. Starting Friday June 19, everyone must have an account with MyRec and all funds must go through the MyRec Prepaid Card System.

The pool opened June 12. Brian Burkholder said they have been trying to follow the Preparedness Plan approved by the council at their last meeting. Groups congregating together has been an issue.

Noah Friedrich, Pool Manager, explained there have been complaints about non-residents using the pool. Clarification is needed as to who can come. The reduced capacity of the pool due to the pandemic is 189 (includes swimmers and non swimmers). Valleyland kids (60 kids) come Monday through Friday from 1-3 p.m., making this a busy time for the pool.

Friedrich noted other area pools are open or are planning to open, including Preston, Kasson, Stewartville, and St. Charles.

Urban argued that members of the community who have purchased season passes may not be able to get in,  especially during the 1-3 p.m. time period. Community members are paying for the pool through their taxes.

Councilor Josh Broadwater questioned why they should turn away loyal customers that had a membership last year. Councilor Paul Novotny said this is not a normal year, “we don’t want an influx of people on a $7 day pass.”

Deputy Clerk Beth Carlson explained the problems involvd with regulating the purchase of memberships and day passes. Day passes are purchased with a debit or credit card. Broadwater suggested charging a higher fee for those living outside of Chatfield. Carlson said that would require an ordinance amendment which would not be completed in time for this season.

Mayor Russ Smith commented about the way they are operating now, “there is no way to control who is getting in. Anybody can get in with a day pass.” Carlson agreed saying one does not have to have an account when a person can get in with a debit or credit card.

Smith asked if they are considering limiting access to the pool because of COVID or because Chatfield residents may not be able to get in if the pool is at capacity.

Novotny asked, if they needed to track who was in the pool yesterday, can they do it? Carlson said it could be done. Novotny added, “I have been looking into ways to limit exposure. Who we allow in can not be a moving target. It is difficult to regulate.”

Councilor Mike McBroom explained he has grandkids who live in Rochester. Ryan Priebe said he has received a complaint from grandparents who voted for the pool and are paying for the pool, but their grandkids don’t live in the school district. Priebe added, “we are already allowing for some risk, as kids are being close to other kids.”

Smith said people know the COVID risk. “There is no way to police accurately the way we are operating now. We are doing questionnaires for COVID.” Smith concluded, “we should get rid of the day pass.”

There is an ongoing effort to enforce social distancing. Burkholder maintained the chlorine in the water does kill the virus, but not what comes out of one’s mouth when there is close contact.

Burkholder said in Spring Grove each household is required to fill out a one time registration form. Carlson suggested they could require everything to go through the MyRec system.

Going through the MyRec system will allow use of the pool to be more traceable. This will eliminate the use of a debit or credit card to purchase a day pass.

Another item discussed extensively is the use of outside equipment. Parents have requested the use of puddle jumpers, life jackets, or water wings for their children. Friedrich said, “we don’t allow the use of outside equipment due to the concern of transferring blue algae to the pool. The pool would have to be closed to clean the pool.” Broadwater said there is no reason to take the risk. Smith said parents should watch their kids and keep them in shallow water. Priebe said outside equipment could also introduce other organisms that chlorine doesn’t kill. These items that are meant to keep the child’s head above water, giving kids and parents a false sense of security. The blanket policy of no outside equipment will continue.

Friedrich noted, “we are operating pretty well on every aspect of the Preparedness Plan.” Urban urged him to go over the plan with the guards frequently.

Wages for those doing pool sanitation were set at $9.72 per hour. Friedrich said he also wanted to utilize these employees to work with the concession stand eventually.

Lucas Dietz was hired as a substitute head guard.