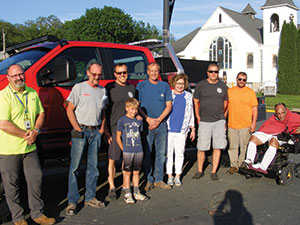 Councilors stepped outside during their May 24 Chatfield City Council meeting to inspect the fire department’s new brush truck. The purchase of the F-550 chassis was approved in November 2020 ($43,059) and the cost of the labor and installation of equipment ($86,008) was approved on December 14. The total cost of the unit which is equipped to fight brush fires was about $130,000.

After the meeting continued in council chambers, Mayor Russ Smith presented the poster celebrating May 2021 Preservation Month. The poster featured “Chatfield’s Prairie School Legacy.” The Chatfield Public Library was built in 1914 and is listed in the National Register of Historic Places.

This year’s Heritage Preservation Award was presented to The Church of St. Mary, Chatfield. The church has refurbished their organ and has practiced good stewardship of the 90 year old building.

Sheriff John DeGeorge and County Commissioner Mitch Lentz continued their informational tour of city councils and organizations. The intention is to fully inform the public and to gain their input. DeGeorge emphasized that it is a data driven process to determine the needs for a jail now and in the future and to ascertain the most fiscally responsible solution.

Working through this process and with the Minnesota Department of Corrections (DOC) the county is avoiding an abrupt shutdown of the jail. The DOC downgraded the Fillmore County Jail to a 90-day facility in 2017. The jail was built in 1969 according to 1911 rules. It is possibly the oldest jail in the state and should have had approximately a 30 year life; it has now been in operation for 52 years. The jail is inspected annually and has several insufficiencies. It will not be allowed to continue to operate, as it is, indefinitely. If the DOC does not see the county working to resolve the issues, it could deliver a sunset order to close the facility.

DeGeorge explained the size of the jail is not the issue, but more the design of it and the lack of program and exercise space. The National Institute of Corrections did a study to determine the needs of the jail in 2017 and determined it was non-compliant and inadequate in several areas. The DOC has determined corrective action will require substantial remodeling or new construction.

Four options for the future are being studied. In the next month or so the committee will make a recommendation to the Fillmore County Board. The options include total outsourcing and closure of the jail, a 72 hour short term book and hold facility, a 90-day facility, or a 365 day facility. The first two options will require the hiring of more staff and the purchase of more equipment and vehicles to transport inmates to other facilities and to court appearances. Both the 90-day and 365-day options will have similar DOC requirements.

The recommendation to the county board will be based on data and future operating costs for the county.

It was noted that the American Rescue Plan Act of 2021 funding can be used for remodeling or the new construction of a jail. Fillmore County is to receive $4.8 million.

Lentz said the county owns the necessary property and location for the construction of a jail; “We have to do something.” Lentz also reported that the county’s current outstanding bond will be paid off in about one and a half years.

•State Senator Carla Nelson, Tax Chair, stopped by to answer any questions about taxes. The legislature adjourned on May 17 with an agreement on a budget bill ($52 billion state budget for next two years). There will be no tax increases and there will be tax relief for Paycheck Protection Program (PPP) loans and extra unemployment benefits from the federal government or Pandemic Unemployment Insurance(PUI). There is expected to be a mid June special session to act on the agreed items and to pass the budget bill.

Nelson said the Department of Revenue will determine how to get this tax relief to employees and employers. Tax law changes to exempt PPP and PUI from taxation will be on the Minnesota DOR website: revenue.State.mn.us/tax-law-changes.

Councilor Mike Urban asked about e-pull-tabs. Nelson noted some people are trying to get them reclassified as slot machines. She said she does not support this. Charitable gaming organizations do great work for our communities.

•Approval was given to pay $21,930.85 to Wm. Hanson Waste Removal & Recycling for the Chatfield clean-up, May 3-7. Almost 84 tons of waste was removed, which included 61 mattresses.