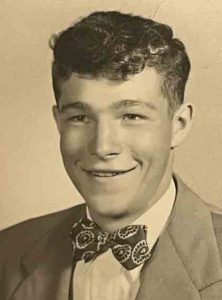 Kent Hanley’s broken heart was too much for him to bear and he passed away on May 18 to join his love, Rosie.

Born Baby Boy Hanley in Jordan Township on February 25, 1936, he was a welcomed son for Charles and Helen. He attended Chatfield High School, earning varsity letters in football and track. Tall, gangly and a little shy, he was nicknamed “Smiley” as he didn’t say much but smiled.

Kent stayed on the farm before joining the U.S. Marines. As a Marine he was on a ship headed to Cuba before it was turned around. Kent stayed on the west coast attending technical school and became an iron worker. He led his own crews on job sites, and walked many picket lines as a union member. It was in Los Angeles where he first met Rosie. On March 12, Kent took Rosie to Vegas where they were wed at The Little White Chapel. They eventually returned to Chatfield where they raised a daughter and three boys.

In his retirement, you would see Kent in Chatfield outside the barber shop, chatting with passersby, and razzing the young kids. He sat in many gyms cheering and cursing as his kids and grandkids played. He may not have said the words “I Love You” but it was there every time he said “drive safe.” Kent also loved to cook and bake. Making homemade noodles in the kitchen and his cinnamon rolls were heavenly, getting as close to Ma Scott’s rolls as you’ll ever have. He also loved to share pies, cakes, and cookies with his friends and anyone going through a tough time.

Kent is preceded in death by his love, Rosie (Fernandez); his parents Charles Richard and Helen (Horsemen), and his sister Lilas (McPherson).