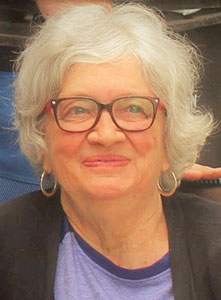 Carol grew up on Strouston Farm in Summit, S. Dak., and graduated as a Waverly (S. Dak.) Woodchuck in 1965. She went on to attend General Beadle College in Madison, S. Dak., on a music scholarship.  It was at General Beadle that she met her lifelong beloved spouse and best friend, Bill Bentson.

Carol and Bill were married on June 24, 1967, and to this union they were blessed with five children: Cori Lorraine, James Joseph, Jacqueline Anne, Roberta Jo Faridah, and William Joseph.

She loved music and dancing and formed many dancelines at the various schools; the Majestics always holding a special place in her heart.  Always the volunteer, she gave much of her time to direct “Share the Fun” skits, choreograph school musicals, and many summers spent managing the 4-H food stand.

Carol wore many hats throughout her life. She was a CNA, danceline and cheerleading coach, activity director, friend, confidant, but her greatest pride was being a loving mom and grandma.

Preceded in death by her son Billy Joe, her parents, Auntie Mag and Aunt Inez, along with other beloved family and friends waiting to greet her.

Celebration of life will be Saturday September 19, 2020, at the Fountain Community Center in Fountain, Minn.  Visitation will be from 2-4 p.m. with a short service at 4 p.m.  Coffee and refreshments will be served after the service.

Graveside ceremony will be at Graceville Cemetery at a later date, to be determined.