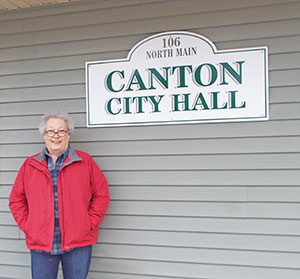 When Donivee Johnson assumed the role of Canton’s mayor in January 1997, transitioning from the role of council member where she had served since July of 1993, Canton city government had no home.

At that time, the city’s main hurdle was the much needed upgrade to the sewer plant.

In 1998, PeopleService was maintaining the sewer plant at an annual cost of approximately $38,000, so the need to upgrade, as well as management of the plant, was an important budget concern.

Linda Grover, of SEMN Development, assisted in getting grant funds for the project, which was a multi-step project, spanning seven years. Three attempts were made to get a grant for the $1.6 million treatment and a block grant of over $400,000 to meet the funding needs.

In 2004 the wastewater treatment plant was completed. Jon Nordsving, who was employed as the city maintenance worker at the time, agreed to assume management of the plant in 2004, ending the PeopleService obligation.

Johnson recalled that there have been lots of expensive additional improvements – pumphouse electrical upgrades at a cost of over $30,000; water tower underground service work of around $40,000, and ongoing water meter work for the whole town, as well as the establishment of ongoing data records to support the service billing.

In more recent years, it had consistently been losing money.  Since it was a capitol fund, the State required that the business show a profit or it would need to be dissolved.  The Secretary of State mandated closure and the city had no choice.

The former liquor was then converted to the current city hall, with construction starting in 2014. The building officially became the city hall in late 2015.

Another major change to the appearance of Canton began when the former train depot was purchased by Larry Huber in 2011.  Huber initially wanted to give the property to the city but because of the major renovations needed, his offer was declined.

The site was later deeded to the newly formed Canton Historical Society.  Extensive repairs have been completed on the site since the beginning of construction in 2014.  The Canton Depot was listed on the National Register of Historic Places in 2018.

The gazebo was added to Main Street in 1999. The Canton Day Off committee purchased the structure materials, with the shingles and concrete donated.  All labor was completed by the firemen and local volunteers.  Additional improvements in the form of a veteran’s memorial have been added since.  The replacement of the gazebo is budgeted in 2021.

Johnson stated that the project that she feels has been the most beneficial for the citizens of Canton was the establishment of the city hall in a central location, with personnel in place to meet the needs of the city.

The city has come a long way with the establishment of 24/7 online access to almost any city service, which Johnson views as a tremendous improvement.

She also is pleased with upgrades to the fire department, with crew who meet the current training requirements and improvements in vehicles and rescue equipment, which allow for expanded capabilities to their service area.

There were so many little events that aided in the city’s growth, too many to recall, that were dealt with on a daily basis by the mayor. She also enjoyed this part of her role over the years.

Johnson foresees a major effort will be required to complete street upgrades in the next decade.  All aspects will require extensive work to ensure completion.

As she ends her long run, Mayor Johnson’s hope is that the quality of government currently provided to Canton’s residents continues.

Thank you, Donivee, as you finish your many years of dedication to Canton.