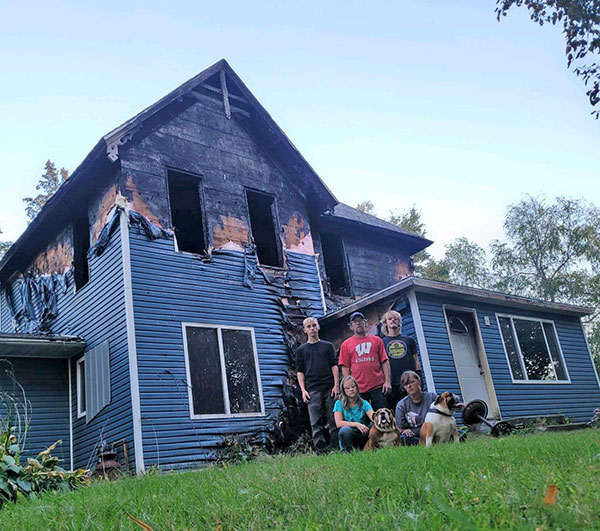 “You hear about people having fires and getting out with just the clothes on their back. We didn’t even have that,” Jamie Knutson said. He and his family lost their home in Canton to a house fire in the early morning hours of September 10. As it happened around 3:30 a.m., the family members were still in their pajamas and didn’t have time to grab anything on the way out.

Due to the holiday on Monday, Jamie’s work week had been pushed back a day and so he was uncharacteristically scheduled to work on Friday. “I’m just so thankful I had to work that day,” he said. When the alarm went off at 3:30 a.m., Holly, Jamie’s wife, thought she smelled smoke so he got up to check it out. “When I got out of bed to check to see if anything was burning, my intention was that I wasn’t going to find anything,” he said. Jamie walked through the kitchen and was planning to head through the dining room to check on their 10-year-old daughter Kylie, but when he stepped into the dining room, he was met with flames shooting up several feet from a boot dryer. He and Holly immediately sprang into action. She gave Jamie the fire extinguisher to work on putting out the flames while she got Kylie and their two sons, 20-year-old Bradon and 16-year-old Clayton, out of the house. Jamie and Holly’s bedroom was on the first floor of the house as was Kylie’s, while the boys’ rooms were up a narrow set of stairs on the second floor with a door at the bottom.

The smoke was already thick and the fire was spreading quickly throughout the house and making a beeline for the second story. Kylie woke up screaming that she couldn’t breathe and immediately opened her window to get some air before she escaped out of the front door. Holly had been hoping that the fire was contained on the first floor of the house, but when she opened the door to the stairs to wake her sons, she was met with thick smoke. “I started screaming up the steps that they needed to get out,” she said. As soon as she could confirm that both Bradon and Clayton were awake and aware of the situation, she shut the door again, hoping to give them a few more seconds to get out of the house before the fire got through it. “They said as soon as they opened their doors, they knew it wasn’t good,” Holly explained. The boys kicked out a window AC unit, jumped onto the first story roof right below the window and then climbed down to the ground from there. They barely made it out in time before the fire devoured their bedrooms.

Jamie refused to leave the house until he could see with his own two eyes that all of his children were safe. Once he was assured that they were, he went back in one last time to try to save the family’s two dogs who were hiding under Kylie’s bed. Unfortunately, their collars had recently gotten wet and so they weren’t wearing them which meant that Jamie had no choice but to pull them out by their ears and throw them out the door. The dogs, unaware that he was doing so to save their lives, were upset with him for a full day after that,  assuming that they had been in trouble. While the dogs survived, sadly, the family’s other pets did not. They lost two cats, a macaw, a parakeet, two guinea pigs, and a hamster. Kylie was especially upset about the cats, having bottle fed one of them from a week and a half old and recently adopted the other one just last winter.

Due to how early in the morning the fire happened, it took the fire department about 12 minutes to arrive on scene. Both the Canton and Harmony Fire Departments responded. By the time the first trucks pulled up, there was no saving the house or anything in it. Early on, Jamie had thrown a dining room chair outside, hoping to keep it from providing more fuel for the fire and he had also pulled the family’s washing machine out of the house. With those exceptions, everything else in the house either burned or was so smoke damaged that it couldn’t be salvaged. Jamie and Holly’s insurance company sent someone from FRSTeam, a company that restores belongings after smoke damage, to go through the house and find anything that could potentially be brought back to their office for restoration. “He went home empty-handed,” Jamie said.

When she saw the family standing outside, shivering in the cold early morning air, the Knutson’s next-door neighbor brought them sweatshirts to wear along with wet washcloths for washing the soot of their faces. By the time, they were done with them, two of the washcloths were so black with soot that they had to be thrown away. Bradon, Kylie, and Holly all experienced some smoke inhalation and needed some oxygen from the EMTs who also responded to the fire, but thankfully, that was the extent of anyone’s injuries.

“Every kid has their favorite toy. Every kid has their favorite Christmas present,” Jamie commented. “They’re all gone.” All three of the Knutson kids were or are active in wrestling at Fillmore Central and had won a lot of trophies, plaques, and ribbons, as well as collected memorabilia from events. “I was so proud of them that they found something they loved so I had it displayed through the entire house,” Holly said. In first grade, Kylie had won a huge trophy for the fastest pin, but like everything else, it didn’t survive the fire. “She looked through the window and she saw that and she started crying,” Holly said. “I told her she had a lot more years to get more trophies.” But Bradon, who graduated from Fillmore Central a few years ago won’t get that chance. “He said, ‘My whole high school career is gone,’” Holly recollected. Thankfully, Diane Hernandez from DianeH Photography offered to reprint all of the wrestling pictures she has taken of the Knutson kids over the years.

“The hardest part about going through this is trying to inventory everything,” Jamie commented. They have been trying to put together an itemized list of everything they need replaced for their insurance claim. Holly recommended that people make a video of everything in their home. “You can’t remember everything you’ve got,” she said. She and Jamie also cautioned others to be sure to have plenty of smoke alarms in their homes so at least one goes off during a fire. They had two working alarms installed in their home, but one was right above where the fire started and melted before it had a chance to go off and the other one didn’t pick up the smoke because it didn’t get that high.

The Knutson family is temporarily living in their camper which they had just bought this spring. They have already met with a contractor about building a new home on their property and were able to get a move-in date of February 2022. In the meantime, they’re looking for a place to rent as living in a camper in the winter isn’t ideal to say the least, but they have been having a hard time finding something big enough for a family of five with two dogs. “At least we’ve all got a roof and a bed,” Holly said. “And we’re all together.”

Since the fire, the family has been trying to get back to normal. Bradon went back to work that same day. Clayton and Kylie only missed one day of school, returning the Monday after the fire as did Jamie to his job at EZFab. “My work has been awesome,” Jamie said, explaining that they’ve let him leave whenever he needs to head home to meet with insurance, the fire marshall, etc. Holly, who works at Tuohy Furniture, is still off work as she focuses on reorganizing her family’s lives. Her employer has been very supportive as well.

Sleep has been hard to come by for the Knutson family, with nightmares disturbing their nights. “One day at a time,” Holly said. “That’s all we can do.” She hasn’t been able to sleep past 3:30 am since the fire happened. “We have nothing plugged in except the TV and the cell phones, and I still wake up and the first thing I do is smell.”

Red Cross made sure that the family had gift cards to purchase medications they needed and even gave them vouchers for new glasses. They usually get their glasses at Eyemart, but were disappointed to learn that it wasn’t able to accept the vouchers. However, after their initial conversation with the store, a representative called them back and offered two pairs of glasses for each member of the family who needed them.

The family has felt a lot of support from their extended family, the community, and Fillmore Central. They’ve received many clothing donations, food, paper plates, towels, etc. “Everyone’s been extremely generous,” Holly expressed. Thankfully, they aren’t in need of any more clothing, but still have a lot of small and large household items they will need to replace. “It’s so hard because we don’t have a house yet,” Jamie said. “We can only store so much.” Holly’s aunt, Deb Swenson set up a GoFundMe page for the family which can be found at www.gofundme.com/f/knutson-family-lost-home.

They may have lost their home and everything in it, but Jamie and Holly Knutson are focused on what really matters. “I have my kids. The rest can be replaced,” Holly said. “In the back of my head, I still think about if we hadn’t moved as fast as we did, we could’ve lost any one of them.”