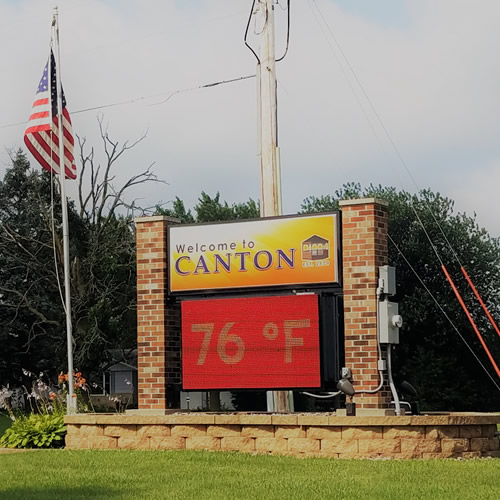 The Canton City Council addressed several sensitive topics at its meeting on April 13, which resulted in a recommendation that the city utilize a conflict resolution service provided by the League of Minnesota Cities.

Clerk Brock Bergey explained that the city has been dealing with several issues of concern lately and those have created a discord between city staff and city council members.

He noted the League provides these services at no cost to the city and he felt a representative from the League could help the city come to terms in three areas. The first, would be for the counselor to help the city move forward after the settlement of the former city clerk’s criminal case, the restitution and how it impacted the city.

Finally, as the city has been discussing wage increases for employees, updating employee job descriptions and the employee handbook, there has been some impacts to the interpersonal relationships between the council and staff. Bergey felt this person could help begin repairing some of those relationships.

“I feel we need to do that,” said Mayor Nick Prestby with the council members voting in agreement.

Bergey explained the process would begin with a one-on-one assessment with council members and staff, which the individual would likely conduct through a phone interview.

Once those are completed, the city would be ready to take the next step in the process.

Following a recent classification and compensation study conducted by David Drown and Associates (DDA), a new pay schedule was recommended. The new plan would set employee wages based on “steps and grades,” which basically means considering job responsibilities and years of service for periodic wage increases.

The new, recommended schedule would include higher dollar amounts associated with each step and grade. These amounts are based on the recent study by DDA, which included wage comparisons of similar positions in similarly-sized communities.

The current employee handbook states, “The City Council shall be responsible for presenting a uniform and equitable pay plan that shall consist of minimum and maximum rates of pay. The pay plan shall reflect an equitable relationship among the job classifications and shall be made after review of comparable worth points and the prevailing wage rate for comparable work in other public and private businesses.”

Generally, all new employees are hired at the minimum rate of pay in the appropriate classification unless their qualifications or other circumstances warrant placement at an advanced rate of pay.

Employees, whose starting salary is at the minimum of the range, shall advance to the top of the range at intervals no longer than the preceding schedule, assuming they receive a satisfactory personnel evaluation.

The city council ultimately passed the recommended pay schedule, with a split vote by the council members. Cindy Shanks spoke in favor, noting that if Canton was not paying its employees a fair wage, it may hurt the city’s chance of receiving grant money or government funding in the future. “Our pay (schedule), job descriptions and employee handbooks are long overdue for updating,” she said.

Councilman Josh Nordsving agreed that the city needed a new schedule, but was concerned about the impact it would have on the city budget. The schedule would take effect immediately, with it being retroactive to January 1 of this year, and would require an additional $5,700 for wages. “I’m not sure that big of a step is feasible right now,” he said. “I wish we could work towards that over time. I don’t think that big of a hit this year is something we can do.”

Randy Gossman, also a council member, agreed with Nordsving’s sentiments. “I’d like to see us work in a percentage each year.”

Bergey said he had reviewed the budget and is confident the city can accommodate the extra wage costs and pointed out memos from both DDA and the city attorney, which outlined legal and practical reasons the city should proceed with adopting the new schedule.

In spite of concerns voiced, the motion passed with only Gossman voting against the motion to adopt the new schedule.

During the public forum, Kristy Ziegler expressed some concern regarding the number of ash trees in Canton. The emerald ash borer is becoming more prevalent in the area. Bergey noted that he and recently had a similar conversation with the city Public Works department. He added, some of the trees will be removed through the upcoming street and utility project, but if a property owner has an ash tree on a lot, according to city ordinances, the costs for removal does lay with the property owner.

Mayor Prestby noted that the First Southeast Bank and its employees have donated funds to buy a bench for the Canton Veterans Memorial. The Legion is also paying for a bench, so two will be located there. Memorial bricks will be installed soon as well.

It was noted that the first restitution payment from former clerk Lolly Melander had been received. Bergey explained that, based on the auditor’s recommendation, the funds will be evenly distributed back to the general fund, sewer fund and water fund. “It’s as simple a process as it can be for us,” he said. “It might not be where the funds were initially taken from, but makes the most sense from a bookkeeping standpoint.” The restitution payment will be about $1,750 every 90 days for 10 years. The city had also received the letter of apology she was directed to write as part of her settlement. That letter can be found on the city’s webiste or as part of this month’s meeting packet, also on the website.

On a related note, Bergey also noted the city had been approved a $10,000 claim on the insurance bond the city carried on Melander. “This is a positive step in moving forward,” he added.

Jon Nordsving brought up the issue of improper concrete and garbage disposal at the tree dump. He requested installing a gate so the dump could be locked and only open when a staff member could monitor it. Bergey also pointed out that having a tree dump is not a service a city is required to provide. The city has discussed installing cameras and other measures to help eliminate improper disposal there. “People continue to choose to violate the ordinance,” he said. No action was taken.

The city approved the resignation of Tyler Newman from the fire department and approved seeking a replacement.

Vergene Kelly, who leads a senior exercise class at the town hall was present to thank the council for the use of the building for this purpose. She also asked if an educational element could be added to the session, which would basically extend the period of time the class takes place. The participants have expressed that the exercises have helped them with strength and balance. The council approved her request.