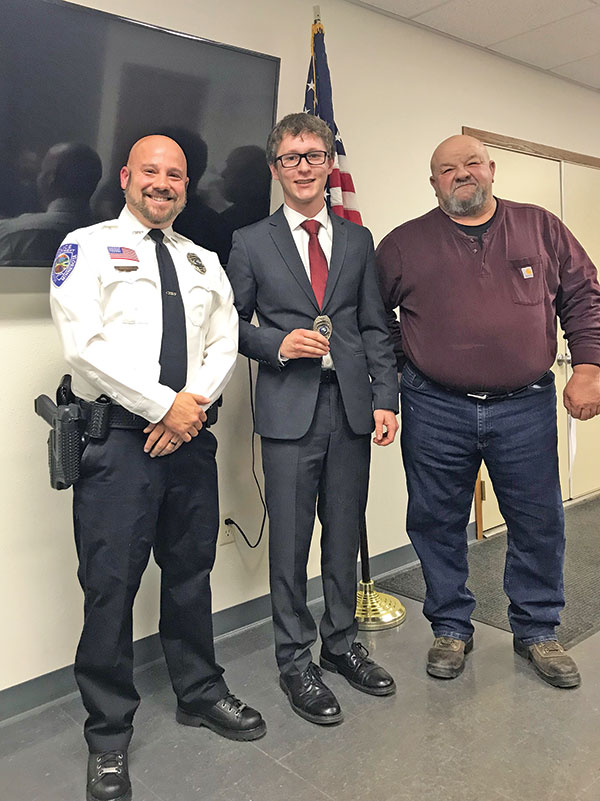 Calvin Nagle was sworn in as Houston’s newest police officer by Mayor Dave Olson at the regular Houston City Council meeting on March 14, 2022. Nagle will begin training with Police Chief Brett Hurley at once; both will take part in the yearly spring police training sessions as well.

Hurley asked for pre-approval on purchasing a new squad car; currently the dealership in Waukon cannot even order one because of supply shortages. Hurley wants to be able to proceed with the purchase when vehicles become available again. The council approved the purchase of a four-wheel drive Dodge pickup. Hurley was looking for such a vehicle so they could easily haul bikes, cones, etc. He noted that this is a special service vehicle and not a pursuit rated vehicle. The council agreed to the purchase providing the expense was the same as the quote of around $38,000 to $39,000.

Other new hires for the City of Houston included the hiring of seasonal maintenance worker Dan Todd. Todd will work a maximum of 185 days. Joshua Hongerholt was hired as a maintenance worker; he will be expected to continue training for certifications.

Preston Peterson submitted a project proposal for his Eagle Scout project. Peterson plans to build an additional further distance archery target at South Park; he also requested funding not to exceed $600 from the city since no funding is provided from the scouts for Eagle Projects. City Administrator Michelle Quinn assured the council that funding was available in the parks and improvement and outlay budget. The city approved the proposal and the funding request.

Andrew Forliti of Smith Schafer presented Houston’s 2021 financial summary to the council. The city received an unmodified “clean” opinion and had no exceptions noted for Minnesota legal compliance.

The LGA (local government aid) has not been increasing as much in recent years; LGA is expected to be $380,500 in 2022, an increase of only $700. As a result, more funding needs to come from property taxes.

Public safety is the largest expenditure by the city; Forliti told the council that this is common for small cities. General expenditures for the city were under budget by $49,046.

The ambulance fund is currently at $203,134 with an increase for the past year of $76,170. Reserves are building now to prepare for necessary future equipment needs and ambulance purchase.

Houston remains just below the threshold to retain the best possible rating with its general fund unassigned fund balance of $343,256; this represents 54.9% of general fund expenditures. Revenues from water and sewer rates are now paying operating costs, debt service, and administrative costs.

• Accepted a resolution reestablishing precincts and polling places; no changes were made to the Houston precinct;

• Gave Quinn permission to close city hall if manpower is needed for the May 24 special primary election and other election dates; the new community center was designated the polling place;

• Approved allowing Quinn to move forward with the process to put the old community center up for a sealed bid sale;

• Agreed to have ABC clean the Nature Center in addition to the other city properties;

• Learned the American Legion and the Hoedown Committee have been notified to remove their property from the old community center before April 30;

• Heard City Librarian Liz Gibson-Gasset’s report on upcoming summer events; legacy grants from SELCO pay for many of the events. The school district has $85,000 available from the governor’s American Rescue Plan Act funds: Gibson-Gasset will be applying for funding from that for additional summer programming. SMIF is offering Capstone grants to provide free books to children. Emily Krage thanked her for applying for grants to which Gibson-Gasset replied with a chuckle, “I love to spend other people’s money!”

The next Houston City Council meeting will be April 11 at 6 p.m. in the city hall council chambers; the public is welcome to attend.