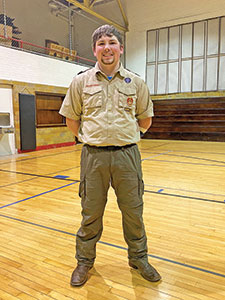 The council unanimously approved the consent agenda including the March 8 minutes, Resolution 2021-06: A Resolution Accepting Donation from Caledonia Ambulance, Inc.; purchase of three-door display cooler from Schmitz Refrigeration, Heating & A.C. at the cost of $6,934 for use at Caledonia Liquor Store; quote to move walk-in cooler condensing unit from inside to outside of the liquor store for the cost of up to $2,280.44; three-year pump station maintenance agreement with Minnesota Pump Works for a yearly cost of $2,558; and Memorandum of Understanding No. 1 between the City and I.U.O.E. Local 49.

Boy Scout Owen Blocker completed his Eagle Scout project last October. The City of Caledonia and the Caledonia Legion provided donations to update the Caledonia Legion/City baseball field’s dugouts. With help from fellow troop members and adults, Blocker applied new paint, added equipment racks for helmets, and hooks for other bags and belongings. Council members expressed their appreciation for his work, and all were impressed with the job he did.

Stephanie Mann, finance officer, offered a detailed picture of the city’s finances. She explained that this is the first year for the fire department line item. It is not unexpected to see that the fire department is in the red after the first two months. Mann explained that the Caledonia Fire District pays for half of the operating and maintenance expenses for the fire department. The city has not received these funds yet; they usually come in during February or March. Mann stated that, “At this time, none of the departments are over budget.”  Mann explained that the big item is the transfer of Payment in Lieu of Taxes funds. She transferred $200,000 from the Electric to the General Fund. Then, $115,000 was transferred from the General Fund to Capital Improvements for future street improvement projects, which is typically done at the beginning of the year. City Administrator Adam Swann pointed out that

the city received $494,000 from the League of Minnesota Cities for pool improvements which hit the books this month. After reviewing the city’s investments and expenses report, the council approved the financial reports. The mayor ended the conversation by stating, “We are looking good.”

The city received a couple of complaints about the property at 420 W. Caledonia Street. Public Works/Zoning Director Casey Klug mentioned that the water is turned off, and he has spoken with the owner. The owner agrees that something needs to be done with the property and has plans to sell it.

Summer youth baseball and softball registrations are underway. The deadline to register is Friday, April 16. Registration forms are available online at www.caledoniamn.gov/city-services/youth-baseball-and-softball/ or by stopping in at city hall.

The council approved the revisions to the city’s utility customer policies and procedures regarding the voluntary removal of water and electric meters.

The discussion from the last council meeting regarding future water and sewer rates continued March 22. Swann emphasized, “We know that minimum rates have to go up to make payments on the bond for well #8 and the future bond for the well house. He reminded the council that the city can revisit the rates next year. With a sigh, the mayor mentioned, “It is too bad we have to do the sewer and water at the same time.” Council members approved the proposed sewer increase of $0.80 per 1,000 gallons and water increase of $0.10 per 1,000. Mann explained, “The increase will start with the May 15 usage and will appear on the July 1 bill giving people time to plan.”

The city received four quotes for repairs to Green Acres Drive, a city road in rough shape. It was noted that all four quotes are for gravel only. Swann explained that the “City’s obligation is to make it passable.” The item was tabled until the April meeting giving city official time to meet with the township and arrive at an agreement.

The council approved using $5,000 from the liquor fund to purchase the former Hauser property.

The future plans for the former Frisch property are on hold. The city will mow the property this summer to get the grass established, as the work to create the pond will involve moving a lot of dirt around.

The Local Board of Appeal and Equalization meeting is scheduled for April 26, 2021, at 6 p.m. before the regularly scheduled council meeting on Monday, April 12, 2021, in the city auditorium.