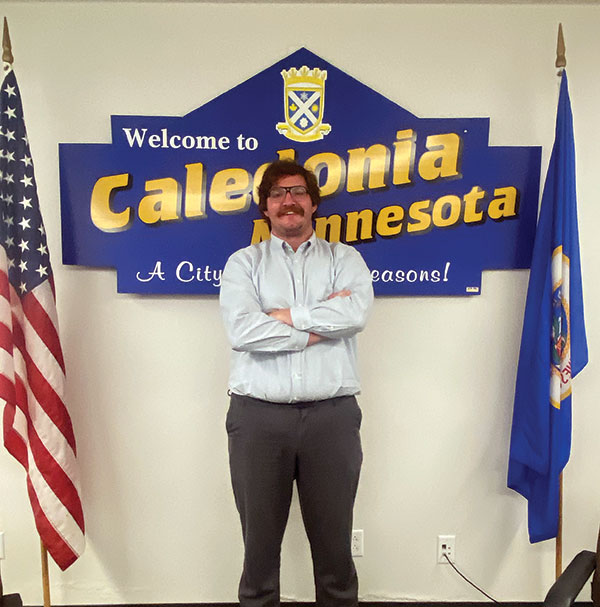 The Caledonia City Council met in regular session Monday, June 13, from 6-6:33 p.m. at city hall. Mayor DeWayne “Tank” Schroeder led the council and audience in the Pledge of Allegiance.

Mayor Schroeder opened the meeting by welcoming Jake Dickson, the new city clerk/administrator to Caledonia and the city council. Dickson promptly stated, “I am ready to get to work.”

The minutes from the May 23 regular city council meeting, disbursements, and payroll were approved.

The council approved the request to pay Wapasha Construction Co., Inc. $349,838.65 for work completed at the Wastewater Treatment Facility.

The Founder’s Day committee request to close Pine Street in front of the fire department, Marshall from the gazebo to Frankie’s, and Lincoln behind the gazebo on June 18 was approved.

Council member Klug mentioned during the public comment portion of the meeting that he received a call from an elderly resident expressing her concern about participating in the new trash and recycling service when she only puts out one bag every couple of weeks. She noted that she has been talking with older residents with the same complaint. It was confirmed that there is no opting out of the new trash/recycling program.

Dickson noted that action is not required regarding Ordinance 2022-01; An Interim Ordinance Establishing a Study Period and Moratorium for a Period of up to Twelve Months on Developments in the Agricultural (AG) District as he is just looking for direction from the council. Council members agreed that they would like the project worked on in-house.

The council granted Ambulance Director Mike Tornstrom request to attend the American Ambulance Association Annual conference in Nashville, Tenn., September 18-20, 2022. Tornstrom explained in his request, “This conference provides attendees with insight into current need to know topics in EMS to include Medicare, Medicaid updates, EMS workforce storages and many more administrative topics. Noteworthy, is the new CMS ground ambulance data collection system which Caledonia Ambulance is in the process this year. It is my intent to concentrate on the cost collection topics at this conference.”