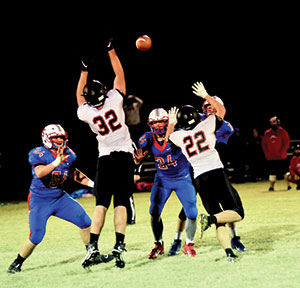 It has been awhile since Lanesboro football posted a truly marquee victory.  Their last great win probably dates to 2013, when the (Niko Anderson) Burros (over the course of two days, oddly) beat eventual state champion Grand Meadow.  Lanesboro finished 8-2, losing to GM in the 9-Man semifinals.  That was the Burros last season of note.  Until, that is, this year.  Entering week five, Lanesboro (3-1) and Southland (3-1) both were amidst good seasons.  The Rebels entered a week five match-up ranked #5 (October 28 polls), having just fallen to #3 Grand Meadow.  The Burros came in unranked having won three straight.  Those rankings will likely be adjusted.  Southland opened the game’s scoring, taking their first possession to pay-dirt (Nick Boe 7-yard TD run).   Lanesboro replied, taking their first possession for six also (J.T. Rein 5-yard TD run).  With a Rein conversion, the Burros led 8-7 after one.  It was the first of four TD runs for the junior running back.  And Southland didn’t answer any.  Rein scored in every quarter, authoring other TD runs of 26, 5, and 2 yards.  A second quarter Caden Anderson interception set up a short field for the Burros, leading to Rein’s second TD run.  James Semmen’s group led 16-7 at halftime, but then scored to start the second stanza, Rein’s third TD run making it 22-7.  He led the way as the Burros got all 337 yards of their offense on the ground (behind the line of Bodie Mayer, Ryan Holmen, Stephan Schultz, Ben Snyder, and Carter Clarke).  They threw just three passes (all fell incomplete).  By a final of 30-7, Lanesboro made a lot of noise in the South-East District.  The Burro defense held Southland to 27 yards rushing on 25 attempts, and 178 total yards.  The Rebels had just two drives with more than one first down.  The Burros had scoring drives of eight plays 80-yards, 12 plays 70-yards, and 11 plays 63-yards.  They procured at least one first down on all eight drives.  It was their fourth straight victory, all in commanding fashion.  Rein (pronounced “Rye-in” for the TV guys who keep screwing it up) was huge (25-132 yards, 4 TDs rushing).  Hayden Lawstuen (9-78 rushing), Seth Semmen (9-65 rushing), and Jake Gathje (7-61 rushing) also topped 60 yards.  Dan Boe (13-25, 135 yards, INT passing) and Eli Wolff (3-58 receiving) led the Rebel’s passing.  Lanesboro is now 4-1.